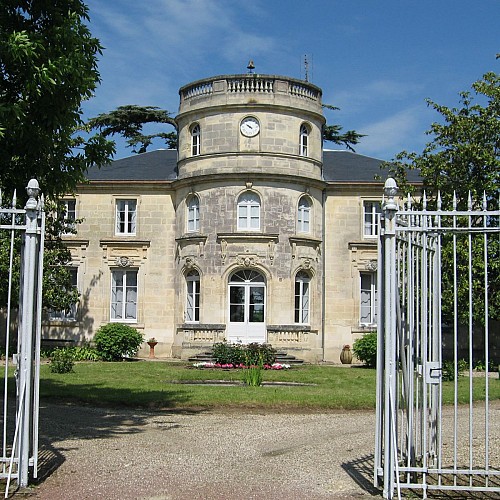 At 5 minutes driving from the Wine Information Center, Château Lamothe is an authentic architectural house with a beautiful central round tower, surmounted by a clock. The wine storehouses were built at the end of the XVIIIth century. Your host will be Anne.

In 1900, her great-grandfather François Pessonnier, wine grower in Lansac, purchases the Château Lamothe and his vineyard. Previously, from the middle of the XIXth century, the previous owner Pierre Charpentier had given a particular development to the wines of the domain by exporting them to the United States. The visit continues with a presentation of the soil and the 23 hectares of the vineyard, the discovery of the cuverie and the wine storehouses. Finich the guided tour with a tasting commented.

Château partner of the Destination vignobles network. Book a free (for individuals) visit and tasting everyday from 9.00 a.m. to 7.00 p.m. from June to September. From 10.00 a.m. to 7.00 from October to May.