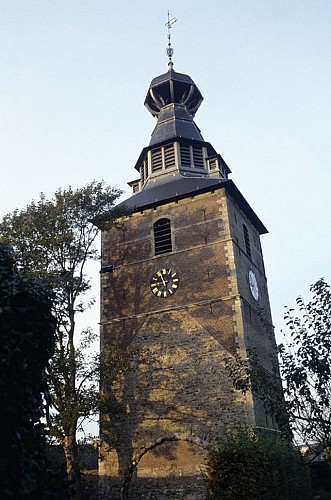 The belfry in Gembloux

Unlike its counterparts in Wallonia, the belfry in Gembloux does not dominate the town in the heart of an open space, but instead it straddles the alleyways from which emerges the top of a bell-tower. Its history is closely associated with that of the Benedictine abbey founded in the 10th century by Guibert. Damaged by fire on numerous occasions in the 12th and 17th centuries, this sturdy square tower with brick and bluestone facing is the only element preserved from the church of Saint-Sauveur. In the mid-18th century, the abbey was the site for a new building programme by the neo-Classical architect, Laurent-Benoît Dewez, which saw in particular the building of a new abbey church not far away. The church of Saint-Sauveur was finally destroyed at the beginning of the 19th century, with the exception of the tower, which housed the municipal bells. The tower still bears the traces of having its east façade dismantled. The current roof is the result of a restoration programme in 1906, following yet another fire. It takes the form of a tall slate roof with an octagonal section with sound holes under a dome open at the base and a wind vane featuring three keys, the emblem of the town.

World Heritage listed by UNESCO since 2005