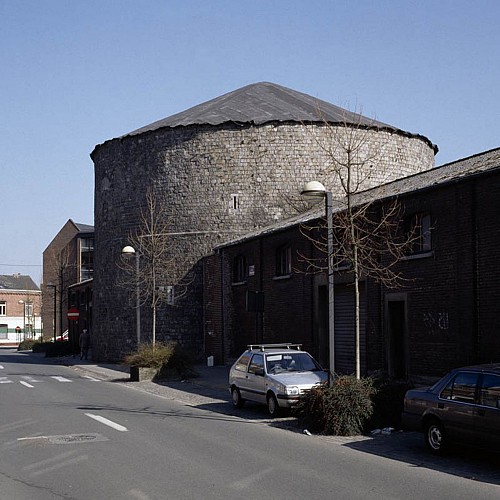 The Tour Valenciennoise, dating from the mid-14th century, is the only remnant still visible of the town's second defensive wall. Begun at the end of the 13th century and completed a century later, this town wall was once flanked by towers, surrounded by ditches and pierced by a number of gates. Evolving over time, the walls were further strengthened in the 15th century by bastions and in the 16th and 17th centuries by works to the outside carried out by French, Austrian and then Dutch military engineers. The 19th century finally saw the end of these defensive works, with the gates demolished in 1815 and the walls in 1861.

The Tour Valenciennoise is a cylindrical structure made from sandstone blocks. Its strength - and the fact that its walls are 4 metres thick - helped save the tower from successive demolition programmes that ended with the 14th-century walls finally being pulled down. The original configuration of the tower, possibly covered by a terrace, is by no means certain, although it has often been depicted or described, notably by Vauban at the end of the 17th century, as having a pepper-box or conical roof. After 1865, the tower was incorporated in the infrastructure of the cavalry barracks that occupied the site. The gradual dismantling of these buildings, begun in the 1950s, has removed all military context from the tower. The Tour Valenciennoise was restored between 2005 and 2009 By the Department of Buildings.