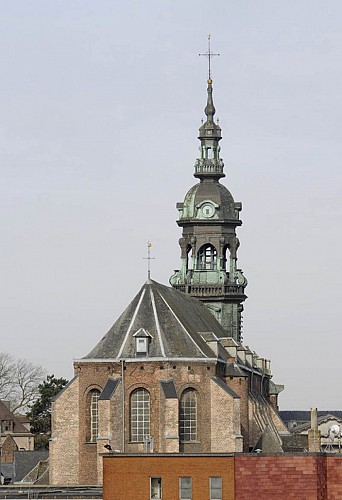 St Elisabeth church is a building in the Gothic and Baroque style, featuring a campanile. Gothic in style and consecrated in 1588, the church was damaged by fire in 1714. It was then rebuilt, partly in the Baroque style baroque between 1714 and 1730 by C. J. de Bettignies.

The Baroque façade of the building is in stone and brick. It consists of a tower flanked by two stair turrets and decorated in the quoins with a representation of a triton knight and siren lady. The square-shaped tower rises on three levels and is decorated on the façade with a projected entablature and arched pediment, annexed by flame vase finials. This level is topped by a blind window with chipped corners, a scrolled frame and a pediment featuring the date mark "1686". The top level, made up of a window of the same type, consists of a triangular pediment with a small round window and topped by a balustrade from which emerges the campanile. This was built between 1719 and 1721 and is capped with window and skylight, crowned by a dome with cross.

The church is characterised by its size (62 m by 29 m). It has three naves featuring sixteen Gothic pillars edged with chapels. The nave is lit by high leaded windows from the 18th century. The chancel, dating from 1730, has three bays and a chevet with three walls. It is adjoined by two chapels and lit by Gothic windows and windows in the chevet. The chancel and the nave have a slated bâtière roof, while the side aisles are topped with a hipped and furred barlogne roof.