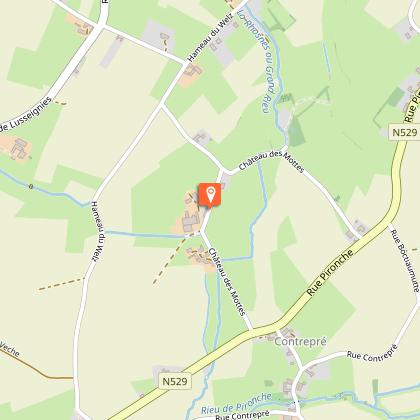 Marie Tack, originally from Brussels, is an interior decorator. She has been coming to the defence of unpopular animals since her earliest childhood. The donkey, wrongfully regarded as a dumb animal, deserved to be reinstated. Not only is the donkey a noble animal, it is also endearing and affectionate. The Asinerie des Collines is part of the Belgian producer of donkey milk. About 150 donkeys live a good life there, for the benefit of the visitors and the fans of this elixir full of therapeutic virtues. A herd of donkeys grazes peacefully in the shadow of the Château des Mottes castle. At the heart of this surrealistic tableau is the dynamic Marie Tack and her family. The restoration works of the castle have been carried out parallel to the reinstatement of the donkeys. The donkey farm has been selling milk with astonishing properties since 1999. This milk’s wholesome effect on the skin has been known for centuries: Cleopatra and later the Ottoman princesses filled their bathtubs with it. We no longer have to be jealous of them, for the Asinerie sells skin care creams, soaps and other beauty products. An idyllic place, not only for the very special milking process or the taste of the milk, but also for the magic of the castle.