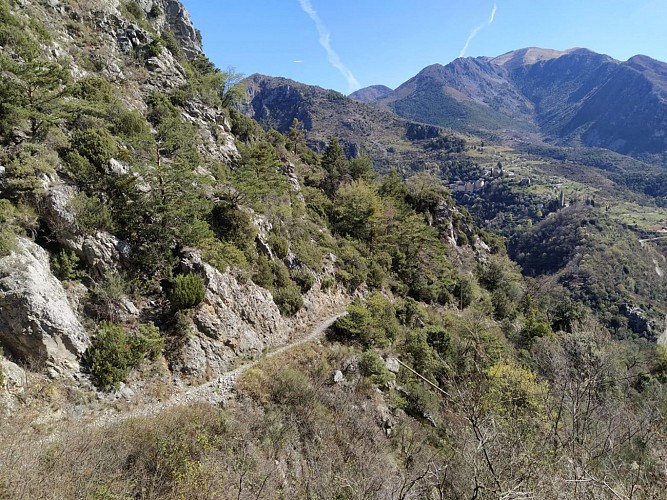 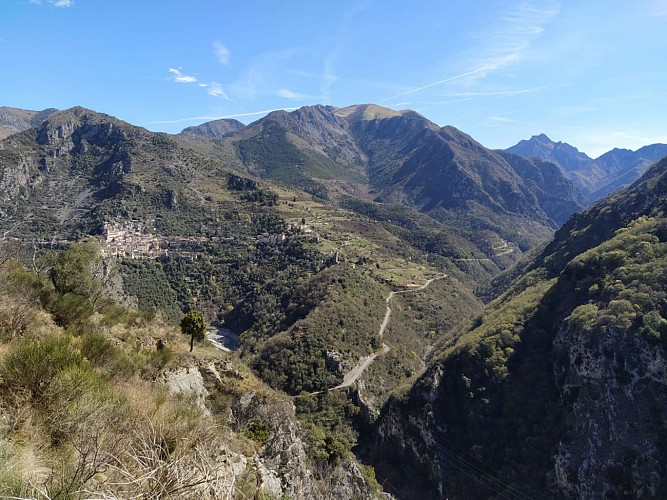 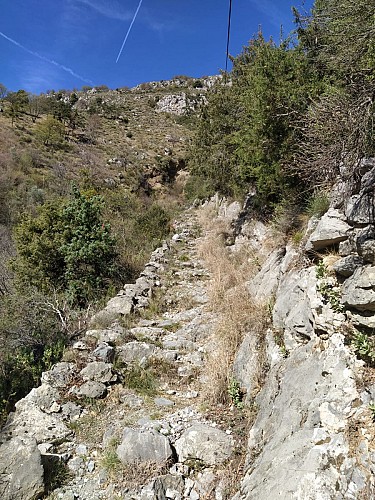 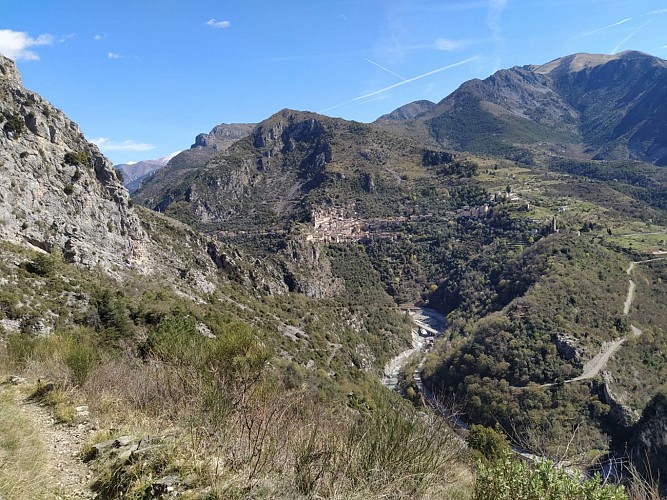 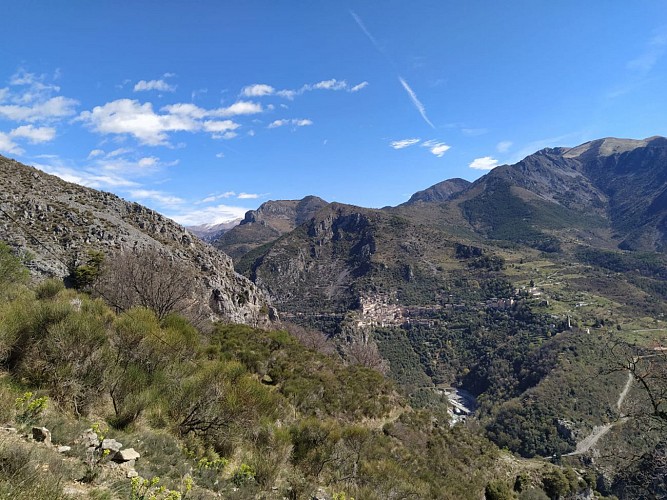 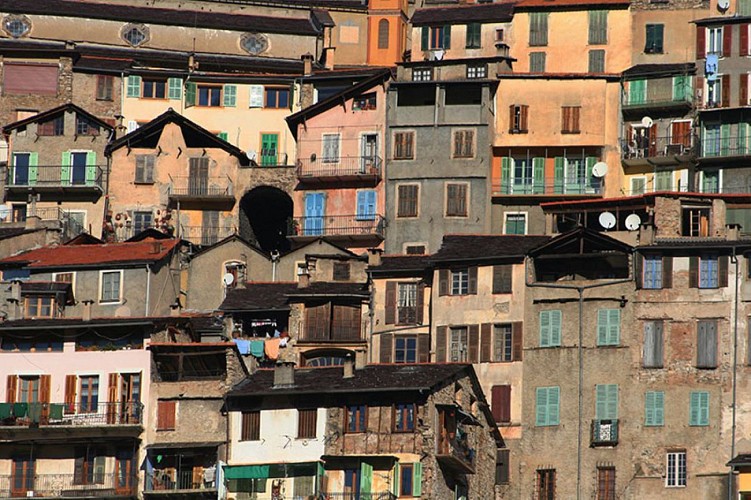 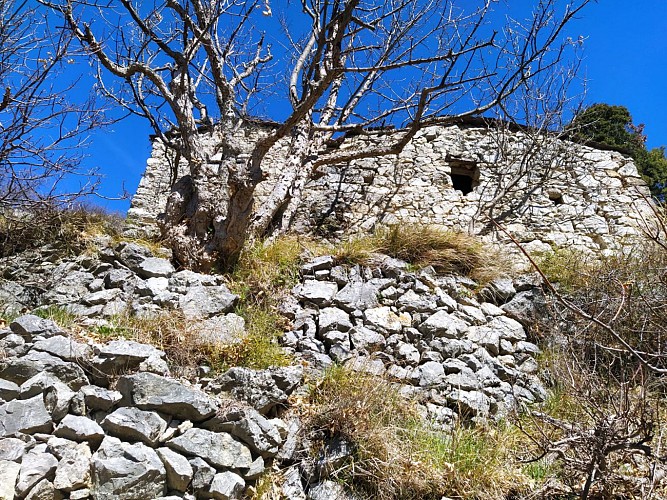 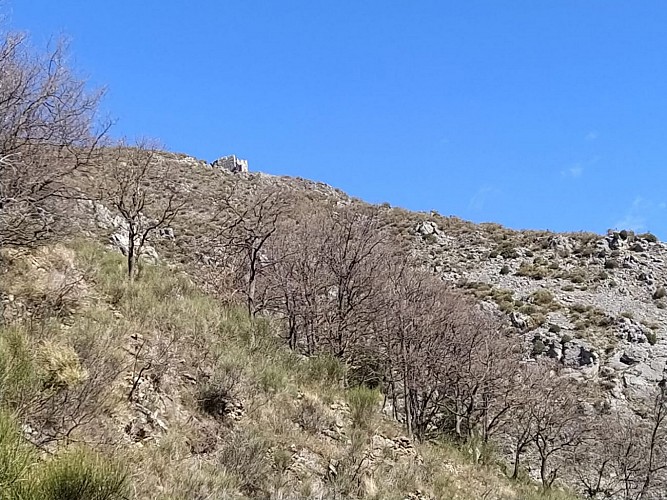 Wonderful hike from one village to another along the old mule tracks, many splendid panoramic views of the villages and the cross-border mountains, heritage interest of the rural chapels. Accessible by train and bus.

Itinerary:
From Saorge town hall, go straight towards the village, the old chapel of the Pénitents rouges on your right, cross the place de Ciapagne, pass in front of the bar to go down on your right towards the Jolliot-Curie primary school and the Monument aux Morts: panoramic view over the whole village as far as the Monastery and underneath the church of the Madone del Poggio.
Continue along Via President Doumergue or Carera Soutana in Saorean, cross the imposing Piazza della Repubblica (Ciassa Soutana), and continue along the same street.
Then you reach marker 19 at the bottom of the village of Saorge, and take the direction of the bain du Sémite by the beautiful chemin des Châtaigners (oratory which offers a superb view of the village in amphitheatre above).
Two possibilities:
- Either by the path on the right before the oratory which descends into the olive grove under Saorge to join the Roya (ruins of the water treatment plant destroyed by storm Alex), then find the bridge of the Common which allows you to join the marker 18, departure of the path of Paspus
- Or by the Châtaigniers mule track. When you reach the road (RD 138, known as the Madonna), go down it on the right, and turn right once at the Roya to reach the Commun bridge (the first arch of which, filled with rubble from various building sites, had been washed away by storm Alex), cross it, to quickly find the start of the Paspus path on the left at marker 18.
The mule track climbs steadily, with splendid views to the east over the village of Saorge, then over the peaks of Anan, the former pastures of Saorge, and the cross-border peaks of the Alpi Liguri park, Peirevieille and Torrage, then southwards to Breil and the Col de Brouis.
You will pass the ancient fountain of Gianche, then the first houses of the hamlet of Paspus which overhang the path. You will see how dense rural life was until the First World War with many old "casouns" (typical rural buildings of the middle and lower Roya, with a "hat" roof) down the path, then houses and sheepfolds that spread throughout the mountain.
We have to stop at the little chapel of Paspus, perched on a promontory with a magnificent view. Unfortunately, its canopy has collapsed.
Continue via Panigeore to Lagouna, waypoints 173, 172, 99; then start the descent to the Giandola de BREIL, waypoint 13.
Join the RD 6204 which you will take on the right, the Breil train station is 1.7 km on your right.

NB: The hike can of course be done in the opposite direction Breil-Saorge, you will have more difference in altitude, and the path is particularly steep at the start, above the Giandola from marker 99 to marker 172 for 3/4 of this portion of the route. The large dimensions of this elegant station make it possible to accommodate...Read more Built in 1928 by PLM, halfway between Fontan and Saorge to serve these...Read more A village in the shape of an eagle's nest, Saorge is a monument in...Read more