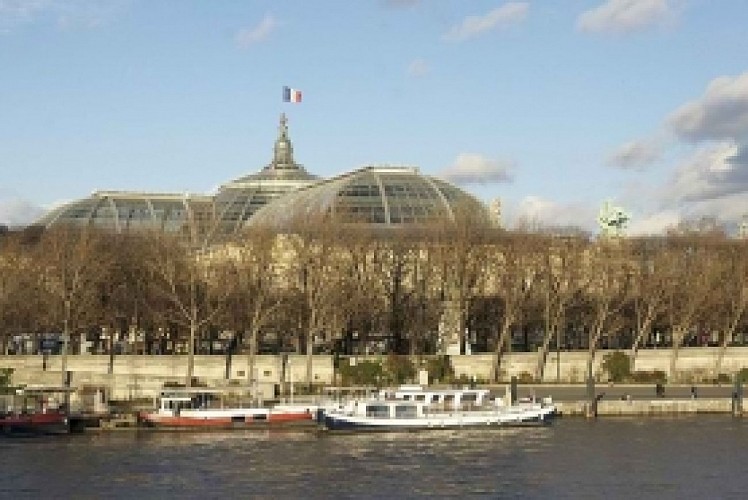 Navigation on the Seine in Paris

In Paris, its length occupies about 13 km, with a depth varying between 3,40 and 5,70 m. Its width varies, it, from 30 to 200 m. The normal restraint of the reach of Paris, that is the height of the surface with regard to the sea level, is 26,72 m2. In Paris, the Seine is crossed by thirty seven bridges among which four accessible footbridges only to the pedestrians.

History
The Seine favored, from the middle of the IXth century, the Norman invasions. In March 845, for example, the Normans who went back up the Seine since its mouth, arrive to Paris which they plunder. They withdraw only against a ransom of 7000 pounds of money. Other assaults will follow during a half a century approximately. In 1170, the corporation of the " traders of the water " receives from king Louis VII the monopoly of the business on the Seine. On their seal represents the nave which is still in the coat of arms of the city of Paris.

August 9th, 1803, experiment of Robert Fulton's steamer on the Seine. The first wash-sheds are anchored in the Seine in 1851 and quickly reach hundred. The arrival of the tap water in the Parisian buildings pulls their progressive disappearance until 1937. During the war of 1870, the Parisians, besieged by the Prussians and without communications with the outside, try to receive from the mail locked into metallic balls, said " balls of Moulins ", launched upstream to the capital. None was however taken in in Paris.

Drink the water of the Seine
The Parisians drank some water of the Seine always, but from the roman time of waters of source of better quality are brought in Paris. We shall note however in 1605 the installation of a pump on the New bridge, said by the Samaritan, who will work until 1813. Also, that of the bridge Notre-Dame worked from 1673 till 1858. The water carriers, the corporation mentioned from 1292, brought at home the water drawn from the Seine or taken in the public fountains, and disappeared only at the end of the XIXth century. Today, the Seine in Paris does not supply any more strictly speaking drinking water to the Parisians, because used waters of surface result from Evry and from Orly, far upstream.

Floods
The floods of the Seine are an integral part of the history of Paris. It seems good that the first mention of a floods is the one of the Roman emperor Julien during winter 358-359. The columnist Grégoire De Tours told then that of the 582. The floods were often fatal in the bridges of Paris. So, in 1280, a floods of the river take the Big Bridge. In December, 1296, a new floods of an exceptional scale take all the bridges of Paris (which in the time supported houses). The most important floods of the Parisian history, known with a sufficient certainty, are the one of 1658.
But the most present historic floods still in the memory of the Parisians are the one of 1910 which lasted nine days, from 20 till 28 January 1910. On January 21st, it achieved certain places about 9,50 m. Numerous postcards showed the devastation, such the accesses of the station Saint-Lazare completely under waters.

It was built between 1852 and 1853 as a railway bridge (to allow the Petite Ceinture line to cross the river) and to link the "enceintes" on the two sides of the river. Its architects were E. Couche, Petit, Gaspard, and Netter. Its width was doubled with an addition on the upstream side in 1936. 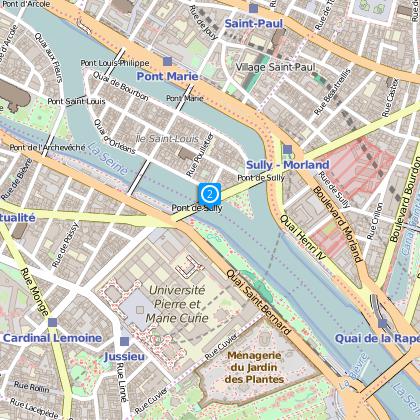 An alternated traffic governs the big arm between the bridge of Sully and the bridge in the Exchange.
Every peak hour is decomposed according to the plan.

From 1863 to 1962, the two-level stone viaduc d'Auteuil (or viaduc du Point-du-Jour) ran across the river at this point, carrying Petite Ceinture trains on its upper level and car traffic on its lower level. When car transport increased on the Boulevards des Maréchaux, and since the arches of the existing structure were too low to be passed under by river traffic, it was decided to replace it. Construction began in 1963 under the architect Davy and the engineer Thenault, and the new structure was inaugurated on 1 September 1966. The present structure is named after General Juin's victory at the Battle of Garigliano in Italy in 1944.
Since the end of 2006, the art-work Le Téléphone has been installed on its downstream side, implanted in the exterior face of the pavement. It consists of a telephone cabin sculpted in the form of a flower by the architect Frank Gehry, with no function other than to receive calls from Sophie Calle, the artist who created the idea, in order to accompany the inauguration of the service on Tramway des Maréchaux, whose terminus is very close.

From Pont du Garigliano to Pont National
Length: 13km
VHF and watch compulsory on the canal 10.

Minimal speed of navigation in the crossing of islands Saint-Louis and of the Cité:
Grand bras: 6 kph for amounts and 8 kph for avalants
Bras de la Monnaie : 6 kph
Bras Marie: 6 kph

To know the hydraulic real time data, the notices in the current canal transport, the free height under the bridge of the Invalides, consult the voice server to 01.40.46.04.92