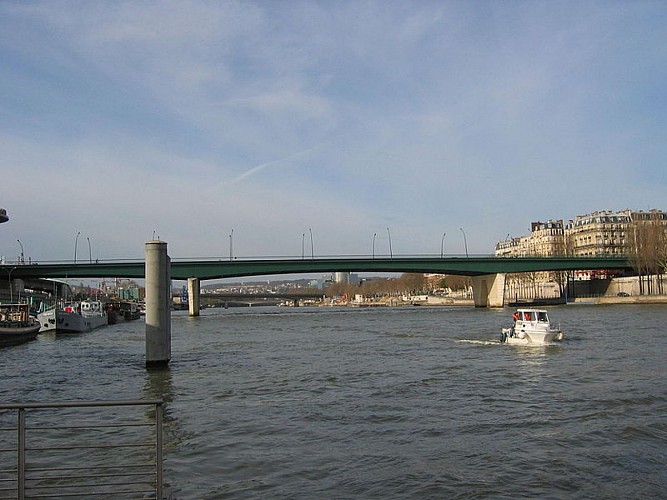 From 1863 to 1962, the two-level stone viaduc d'Auteuil (or viaduc du Point-du-Jour) ran across the river at this point, carrying Petite Ceinture trains on its upper level and car traffic on its lower level. When car transport increased on the Boulevards des Maréchaux, and since the arches of the existing structure were too low to be passed under by river traffic, it was decided to replace it. Construction began in 1963 under the architect Davy and the engineer Thenault, and the new structure was inaugurated on 1 September 1966. The present structure is named after General Juin's victory at the Battle of Garigliano in Italy in 1944.
Since the end of 2006, the art-work Le Téléphone has been installed on its downstream side, implanted in the exterior face of the pavement. It consists of a telephone cabin sculpted in the form of a flower by the architect Frank Gehry, with no function other than to receive calls from Sophie Calle, the artist who created the idea, in order to accompany the inauguration of the service on Tramway des Maréchaux, whose terminus is very close.