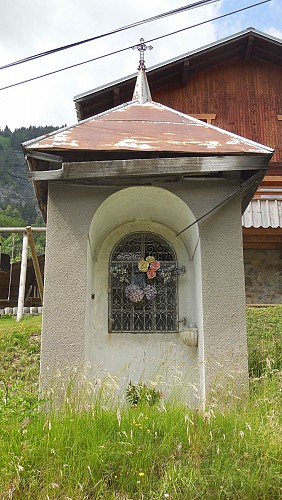 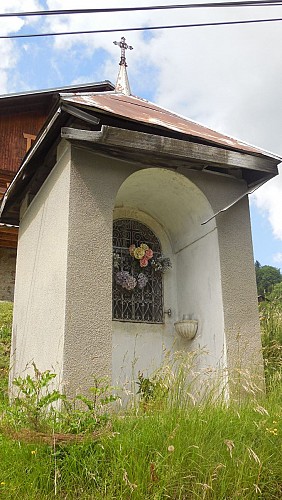 Oratory of the Immaculate Conception

This is a solidly built white-rendered building, dating from 1866, with four-sided metal roof which is topped by a wrought-iron cross. A small font is on the right of a recessed alcove protected by a wrought-iron grill: “CMF 1867”.
Inside, a golden plaster statue (60-70 cm) of the Virgin with a snake ; on either side of the Virgin is a cherub, and behind her, a golden sun with a dove ; on the altar covered by a white cloth, is a bronze statue of Christ, a small statue of the Virgin, a wooden frame with a faded inscription: “His Holiness Pope Pius IX grants 100 days of indulgences”, 4 superb glass cloches containing a religious vase made of porcelain.
Interesting fact : “Resident of Flumet and Mayor of this commune, Marie- François Marin- Cudraz, is in the process of building an oratory in honour of the Immaculate Conception on her property, at the edge of the road, as requested by one of her daughters on her deathbed”. Letter dated 4 June 1866 from curé Mouthon, requesting permission from the bishop to bless the oratory and to ask him to provide indulgences. (source Abbé Duval)

From Flumet, continue driving 4km along the N212 towards Megève ; turn left at the place known as “Les Pontets Morettes”; the oratory is 800m off the main road, on the right-hand side.