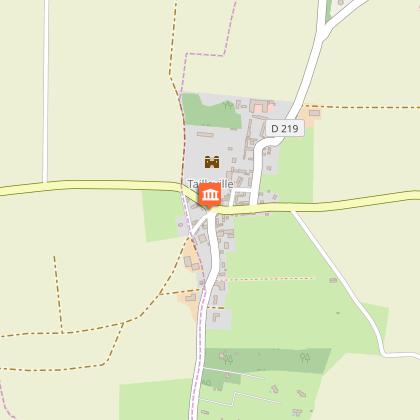 A stone cross is located in Tailleville, in the centre of the Royal North Shore Regiment Square. The pedestal is identical to that of the Dover cross: square in cross-section and decorated on all four sides with rectangular panels. It supports a round and smooth column made of four pieces of stone. The column is not finished with a capital but with a strong round moulding and a square entablature; it is surmounted by a Latin cross with a Christ carved in low relief. A white marble plaque affixed to one side of the pedestal recalls the names of the soldiers of the town who died during the two great wars of 1914-1918 and 1939-1945. It is also struck by the war cross.

This column was originally located a few dozen metres from the square, at the corner of departmental road 35, generally known as the Bayeux road and the Bernières road, precisely on the territory of this municipality: it was a cross of the road. The mayor of Tailleville Georges Pierre made his trip in 1960. A document was sealed under the pedestal. This cross became the memorial to the dead of Tailleville. But the plaque also bears the invocation "O Crux Ave" - Hail O Croix, which appears on most of the Calvaries of our country. Cross of the road, Calvary and memorial to the dead, the column of Tailleville is all three at once.