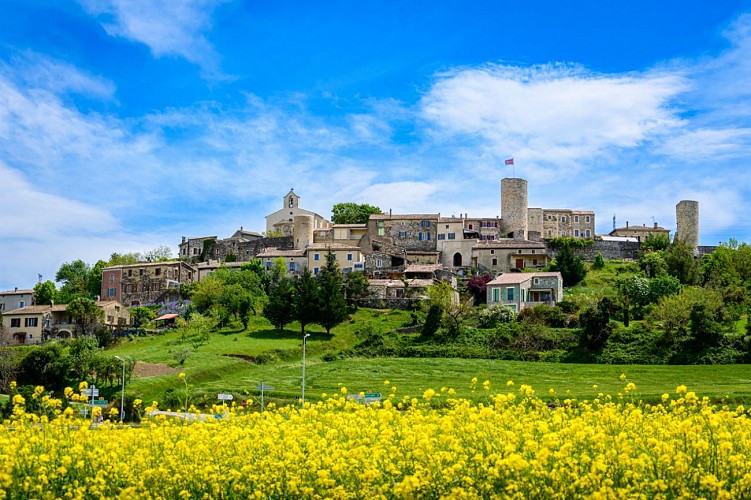 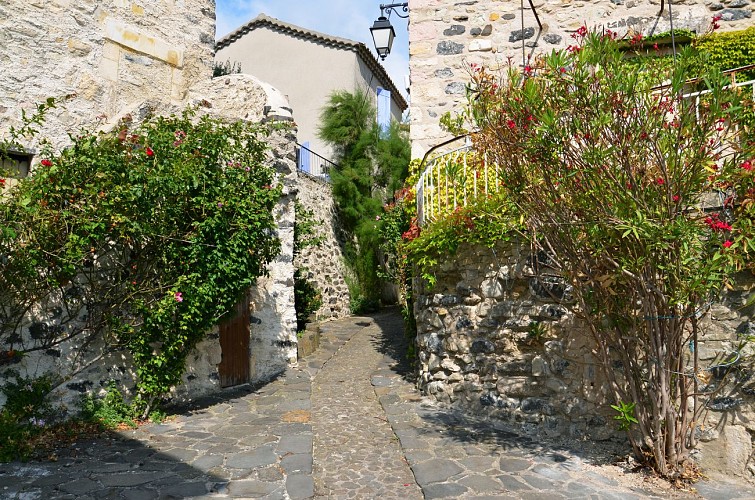 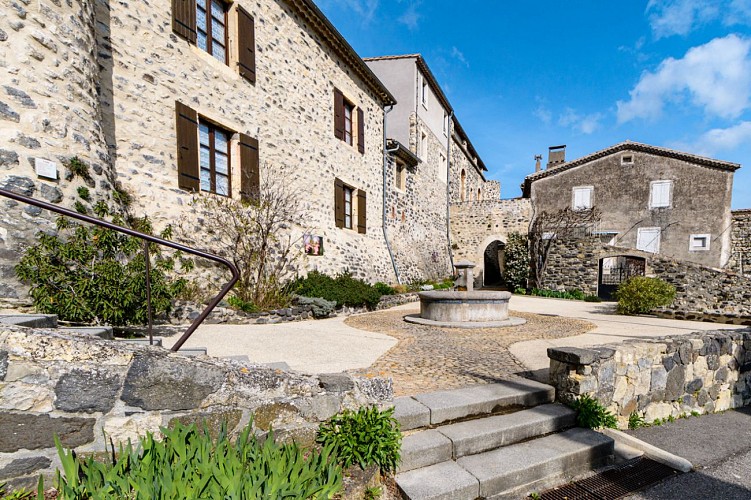 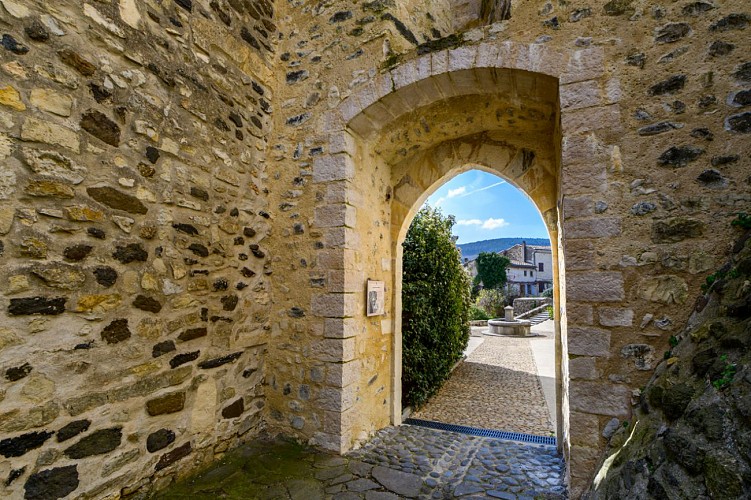 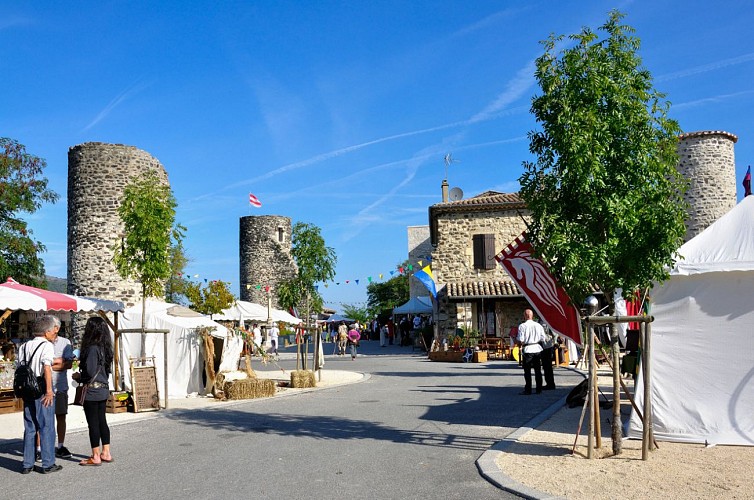 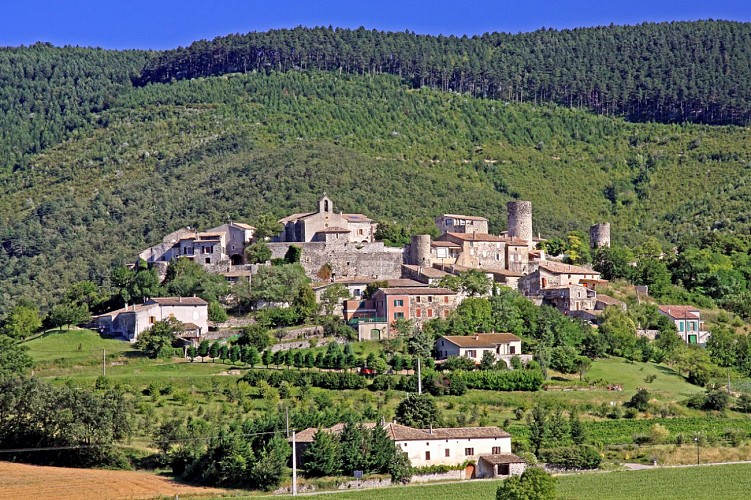 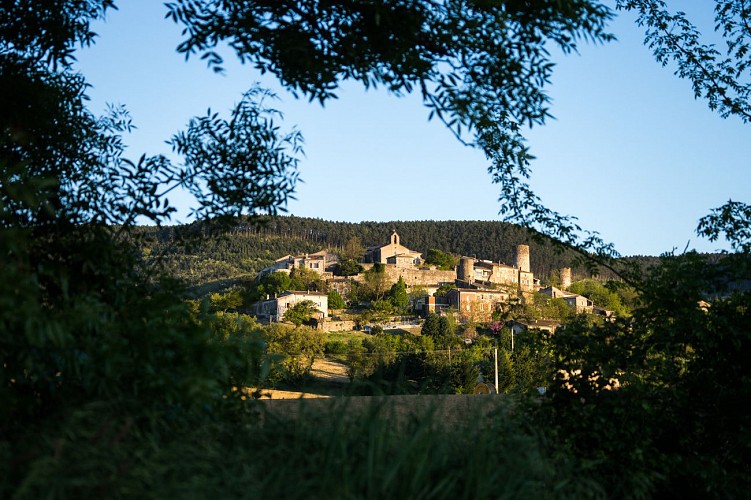 Saint-Vincent-de-Barrès: a village with outstanding character

A fortified and perched medieval site exceptionally preserved.
Located on a rocky headland, in a water drop shape, the village dominates the Barrès plain, spotlighting the remnants of its medieval past.
Visitor arrives through the Notables’ door, which is the main access; he can see the particular configuration that allowed defending it. Through the heart of the village, several stalls look like they are ready to open. The Dungeon (from the late 12th century), head office of the City Hall, highlights the limestone stone, in contrast to the chequered buildings that combine white and black stones of Coiron.
Fortified village which is listed building as historic monument, Saint-Vincent-de-Barrès is also labelled as a “Village of character" since March 19th, 2012. This medieval village is perched on a basalt neck from the Barrès plain. There are lots of narrow streets, winding roads and houses in basalt.
Built on a rocky headland overlooking the plain and the current road from Privas to Le Teil passing by Meysse, towards the Coiron plain, Saint-Vincent-de-Barrès is a good example of a fortified village, which is partially preserved and restored. It has six towers along the ramparts and four others (including the prison tower) protecting the castle. The dungeon is from the end of the 11th century, the additions of the castle have been added in the 12th and 13th centuries. We can see The Chambaud de La Tourette family’s heraldry, above the City Hall door, in the renovated buildings of the castle.
Sir "Stéphane", a knight, would have built a fort at the Barry, in front of Saint-Vincent-de-Barrès in 925. Before the 10th century and according to the “charta vetus”, the diocese of Viviers created a foundation on the Gallo-Roman villa territory: the villa Artenica. In 1020, the Bishop of Viviers swapped with the Benedictines monks of Cluny the church of Saint Vincent with the church of Meysse. The Benedictines monks stayed almost until the French revolution.
In 1905, Genton of Barrès took part of the first crusade. A disagreement between the Valentinois earl and the Bishop of Viviers about the suzerainty of the Barrès is set in 1213, to the benefit of the Bishop. Barry fort, sold to the Valentinois earl in 1256, is seized by order of the King in 1390, and returned in 1392.
From 1424 to 1446, the Barrès, like the Valentinois, belonged to the Duchy of Savoy. In 1467, it belonged to the Royal domain. In 1574, Saint-Vincent was taken by the Protestant but it stayed away from the main disorders from the Wars of religion. It was the same during the French Revolution. The rampart was partially demolished between 1830 and 1905.

Free access. Group: guided tour all year round, advance booking required (€3).
Guided tour for individual visitors in Summer according to the programmation.