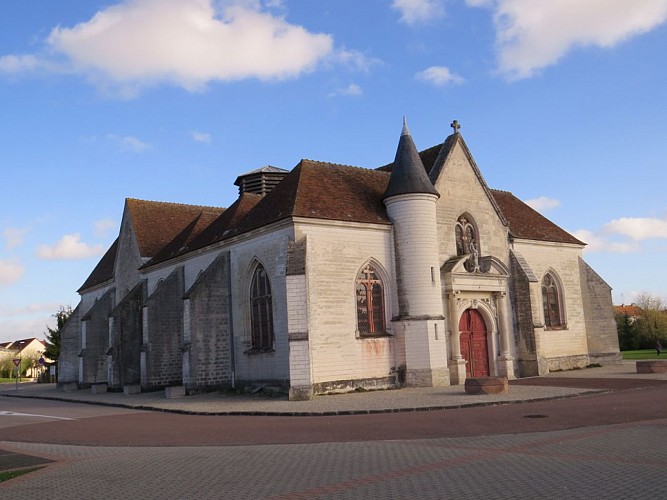 A listed monument from the 16th century, the church of Noës is a unique monument, notably for its statuary and its remarkable stained glass windows. It was built in the 16th century, dedicated to the Nativity of the Blessed Virgin, even though it is often called Our Lady of Christmas or Our Lady of the Nativity. Of great dimensions for the small village of a few hundred inhabitants that was Noës in the 16th century, it was a richly endowed place of pilgrimage. A carved wooden altarpiece, made in the 1550s, with exceptionally well preserved colours, is among these treasures. Having undergone the assaults of time, it required a long and meticulous restoration, adapted to the three species that make it up: lime, oak and poplar. Presented at the exhibition Le Beau XVIème in Troyes, it has since been restored to its original position, under the vault, where remains of original paintings remain, framed by woodwork and renovated monastic stalls, and surmounted by stained-glass windows. The restored altar completes this triptych, which represents the carrying of the cross, the crucifixion and the resurrection. The inauguration of the restored altarpiece took place at the beginning of 2011 at a ceremony presided over by Canon Bertrand Roy, Episcopal delegate for the Trojan agglomeration, in the presence of Jean-Pierre Abel, mayor of Les Noës. In addition, the painting of the Institution of the Rosary regained its place on a wall of the church at the end of 2015 after having also been restored, financed by a subscription, initiated by a local association, supported by the city and many private and institutional donors.