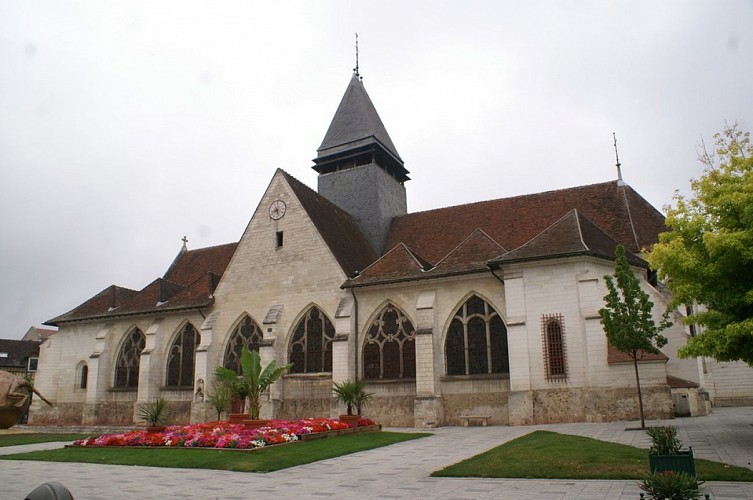 The first church dedicated to Sainte-Savine was built in the 7th century on the burial site of Savine, a young Christian who died in 288 when she learned of the martyrdom of her Savinian brother, evangelizer of the Tricasses. The current church was built at the beginning of the 16th century, and is very homogeneous. The west portal is a little more recent, it was built in 1611 by the Baudrot brothers. The church has a nave and two aisles with three bays, bordered by side chapels, both to the north and south. The last two bays constitute a double transept without projections. The apse has three sides. The whole is entirely vaulted with warheads. The bell tower rises above the transept crossing. The remaining old stained glass windows, often only in the upper part of the bays, date mainly from the early 16th century; and from the early 17th century for two southern bays. For this last period, there are contracts in the parish archives with glass painters such as Toussaint Rudiger (or Audiger), in 1603, to have "perfect" all the glass roofs of the church, with Linard Gontier from 1620 to 1628 as restorer, then, in 1635, with Etienne Clément and Etienne Jubrien to "raise" eleven panels; finally, in 1639, with Linard Gontier's son or nephew, Jean Gontier, for repairs.The subjects dealt with by 16th century stained glass windows are very varied. For example, there are the Litanies of the Virgin Mary, associated in a composite glass roof with Marian scenes, a great Crucifixion and figures of saints. In other panels, the scenes of the life of Saint Eloi, the martyrdom of Saint Hippolytus, the windows of the Passion and the Resurrection come from probably older cardboards that are widely used in the region. Finally, the fourth north chapel has a glass roof dedicated to the Life of Saint Savina. A fragment showing a Trinity in grey dated 1611 makes up one of the days of the tympanum of a glass roof made in 1885 by Hugot, and towards the end of the 19th century, the glass decoration was largely completed. Already by the Trojan glass painters Vincent-Larcher (bays of the sanctuary : legends of Saint Savina and Saint Savinian, 1868-1870) and especially by Hugot, who intervened between 1877 and 1885, and to whom we owe in particular in the southern chapels, the Incredulity of Saint Thomas, the Meal in Emmaus, the Transfiguration, the Life of Joseph and Mary and the Life of Christ; and in the northern chapels the Lives of Saint Loup, Saint Mary Magdalene, Saint Mammès, Notre-Dame de la Salette and the figures of saints. Bay 19 (legend of Savinien) is due to the Parisian master glassmaker Claudius Lavergne who made it in 1888. At the same time, these workshops have restored the old stained glass windows. The Vinum workshop restored and then rebuilt all the stained glass windows between 1948 and 1955. Since then, some of the bays have been restored once again. Church and stained glass windows have been classified as historical monuments (as buildings) since 4 January 1921.