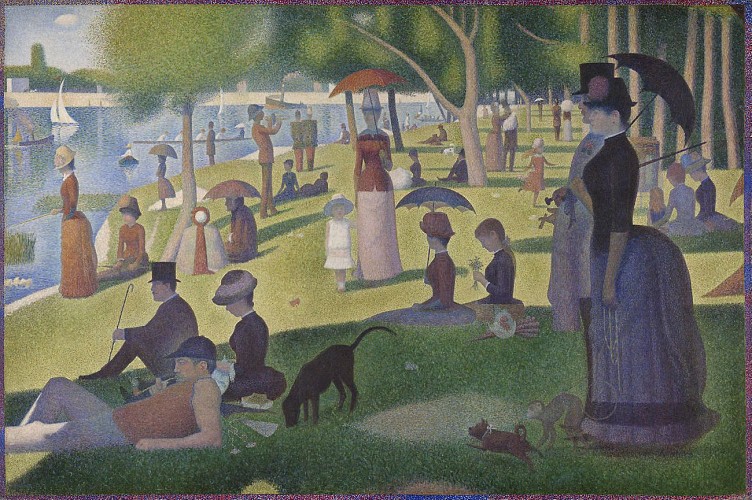 A Sunday afternoon at the Grande Jatte is a large painting, (81 3/4 × 121 1/4 inc.
Deliberate monumentality: Georges Seurat (1859-1891) conceived it as the manifesto of the movement that he defines neo-impressionism, as does Paul Signac. He wanted to distinguish himself from Impressionism by its scientific character.
Perception colors in the light are no longer suggested empirically, as Monet or Renoir tried to do, but according to the complementary system designed by Michel-Eugene Chevreul (1786-1889). He again chooses a contemporary subject, following Baudelaire and Manet: the leisure of the Parisians on the island of Grande Jatte, on the Seine, between Neuilly and Courbevoie, a very popular place for walkers and meetings. Here you can meet the bourgeois, the craftsmen with their caps, lovers and mothers,military on the run and chic couples.
Seurat combines the modernity of the motif - urban life - like Caillebotte or Degas describe at the same time - the modernity of the divisionist process (divisions of tones by juxtaposition of "pellets" of color). For two years, Seurat prepares both his social inventory and his analysis of fabrics and skins in the sun or in the shade through many preparatory drawings (about thirty) and painted studies (more numerous).
With a dandy humor,he introduced some incongruities, a leashed monkey, an elegant angler and a trumpet player. This variety of patterns allows a greater variety of colors, so demonstrates the excellence of divisionism. After two years of work, One Sunday afternoon is exhibited from May 15 to June 15 1886, during the eighth exhibition of the impressionist group, then at the Salon des independents in August and September of the same year. If Seurat’s confreres watched the experience with curiosity, the criticism is less easy to understand.
(The World april 2013 Philippe Dagen)