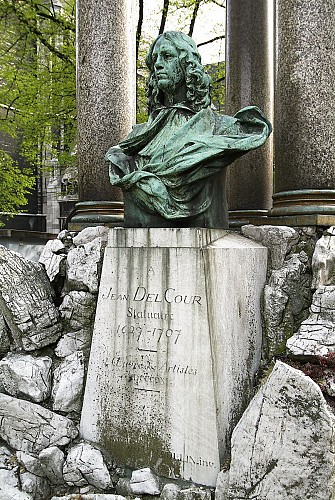 In the middle of the place Saint-Paul square stands a monument. Created by Paul Du Bois in 1911, a bust depicts the baroque sculptor Jean Del Cour. A major artist from Liège, Jean Del Cour was born in Hamoir in 1631. Like many artists, he left for Rome to pursue his apprenticeship. According to local lore in Liège, he is said to have been the pupil of Bernini during his stay in Italy. On returning to Liège, he produced many commissions that still adorn the churches and streets of Liège. Del Cour is also said to have been contacted by Vauban to work on a statue of Louis XIV. The sculptor from Liège is thought to have refused due to his advanced age and infirmity. He died in Liège in 1707.