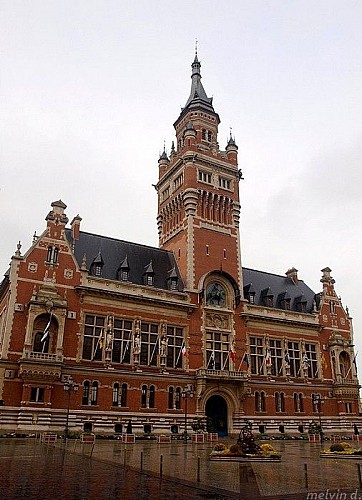 Belfry of the Town Hall

In Flemish Renaissance style (1901), the Town Hall was built of stones and red bricks. Its astonishing belfry rises to 75 meters high. On the main facade stands an equestrian statue of Louis XIV who bought the city from the English in 1662. The belfry is not open to visitors, but you can admire in the main hall the magnificent stained glass window made by Félix Gaudin, commemorating the triumphant return of Jean Bart after his Texel victory. During the carnival of Dunkirk, it is from the balconies of the Town Hall that the mayor and officials throw some 500 kg of smoked herring to thousands of carnivals.