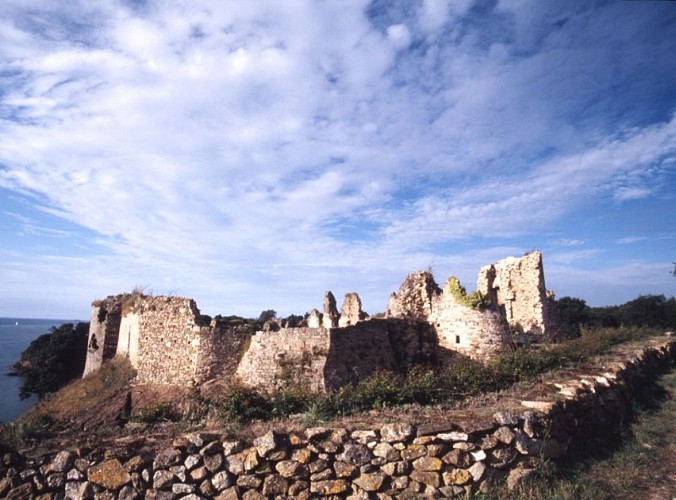 The old castle of le Guildo

This old castle is built on a rocky peak at the mouth of the ria. A strategic position since the Arguenon River was a border as well as a way inland.
A first fortified house from the 11th and 12th centuries, mostly made out of wood and earth, is replaced in the 13th century by a stone castle, built according to a quadrangular plan with angle towers. The castle’s great architectural quality shows the will of the new ducal dynasty to assert its predominance on the area.
The castle is torn down during the Succession War of Brittany (1341-1364); in which Jean de Montfort and Charles de Blois fight
over the rule of the duchy. At the end of 14th century and the beginning of the 15th it is rebuilt by Charles de Dinan and acquires its actual plan. In the middle of the 15th century, the castle reaches its peak and becomes a true princely residence. It then belongs to Françoise de Dinan and her husband Gilles de Bretagne, the Duke’s brother. Abandoned in the 17th century, it is saved from neglect in 1981and is being studied and revalorised.
The site, which belongs to the Département des Côtes-d’Armor, is a Monument Historique and Espace Naturel Sensible (Historic landmark and Sensitive Natural Area).
This remarkable natural site and the singular history of the ruins make this a privileged walking place.
A heritage note is available to get more information on the castle.

From the castle, go there and back to the ringing stones (mind the tides).