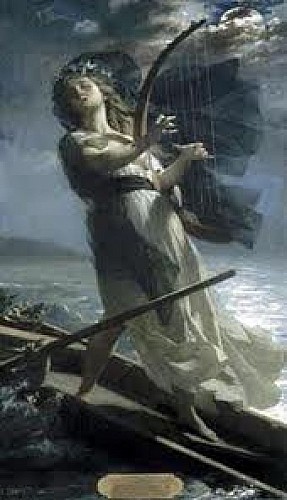 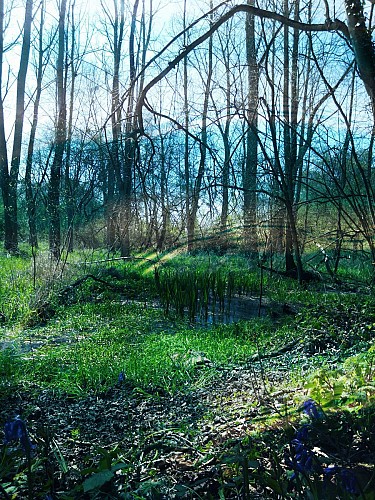 You are arriving, after taking a path, by a stream in front of a rock.

Imagine the young Chateaubriand coming here two centuries earlier to take a nap and let himself dream.
Facing him, the marshes werein water which the warm summer days turned into mist, favourable to dreams.
That's here that he had the vision of druidess Velléda, Romantic figure of the "martyrs".
"Soldiers warned me that for a few days a woman exited the wood at the beginning of night, went up alone in a bark and crossed the lake, got down on the opposite bank and disappeared.
Hidden amongst the rocks, I waited for a few moments without seeing anything appear. (...) I discover a skiff hanging on the top of a wave, a woman lead it; she was singing whilst fighting the storm, she looked like she was playing amongst the winds; one would have said they were under her powers, so much was she appearing to challenge them. (...) Soon she reaches the shore, soars to terra firma, goes deep into the woods. She passed by me without seeing me. She was tall of height, a black tunique, short with no leaves, barely served as a veil on her nakedness. She was carrying a golden sickle hung to a bronze belt and was crowned of a oak tree branch. The whiteness of her arms and of her skin, her blue eyes, her pink lips, her long blond hair floating freely, told of the daughter of the Gaulish, and contrasted by their softness to her proud and wilde gate. She sang with a melodious voice terrible words and her bare breast fell and rose as the waters' foam." (Extract from Martyrs)