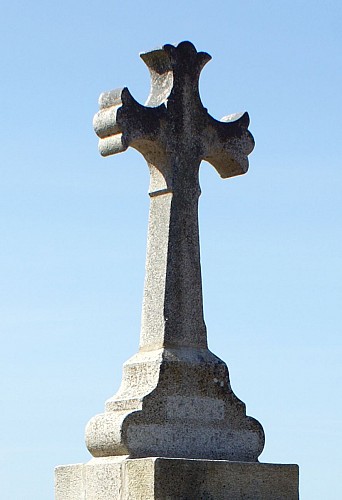 Erected in 1820 on a calvary located on the edge of the "rue des Marais", the cast iron cross of Kervalet was replaced in February 2007 by a granite cross offered by inhabitant of the village of Batz-sur-Mer.

Having suffered several times the involuntary attacks of motorists blinded by the sun, the old cross was broken for the first time in 2002 following a more violent shock. Although it was rewelded and replaced on Calvary, it didn't withstand a strong gale during the storms of 2006 and broke into several pieces as it fell to the ground.

Thanks to the generosity of a particular donator and to the hard work of the technical services of the city who made up a base of 50 cm and which sealed the stones, the new granit cross of 1m80 match harmoniously with the base of the calvary and fits perfectly into the landscape.

If the inhabitants of Kervalet will remember for a long time of their old cross, caracteristic model and very usual of the region, they had already adpted the new granit cross. ​At the end of the Mass celebrated at the chapel in honor of Saint-Marc on April 24, 2007, she received the blessing of Father Joel.