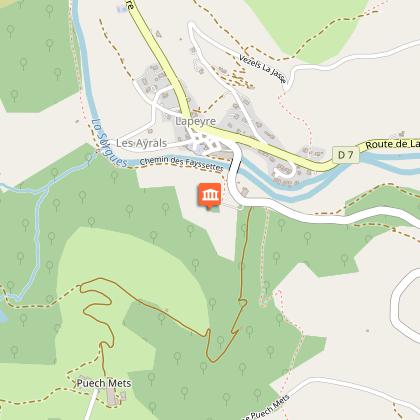 Saint-Caprais church stands opposite the entrance to the graveyard. In 1058 it was given to the Saint-Victor Abbey in Marseille. During the middle ages, the church was the centre of a very old parish which included the Lapeyre, Montalègre and Versols castles. In a short period of time a monastery was set up here by the Marseille Benedictine monks, but the 18th century Cassini map only mentions a ruined priory. The rubble of the Romanesque church was cleared away in 1880 revealing its former outline in the ground. The carved tympanum contains several informative details. The upper arch moulding which is ornamented with acanthus leaves intertwined with a 3 braided strand, displays a pattern called “fond de corbeille” (basket weave) on its top. The rose-colored sandstone used in Lapeyre is identical to the type used in Conques. The embossed pattern and the acanthus leaves can also be seen in Conques on one of the capitals, which dates the tympanum during the 3rd quarter of the 11th century. From the graveyard, two arches, the remains of the ancient Saint Sauveur church, can be seen in the village. This church was built on the fortified rock from which the village of Lapeyre was given its name.