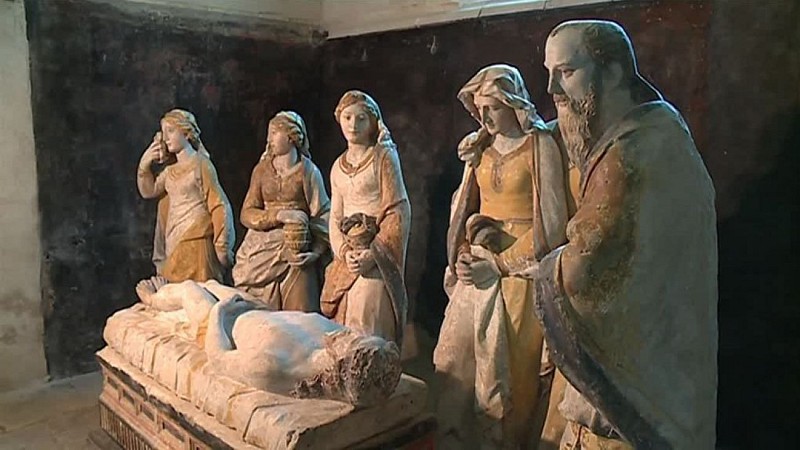 Saint-Rémi church, rebuilt at the beginning of the 16th century (classified as a historical monument) which houses the jewel of the Renaissance stained glass windows of Haute-Marne (17 16th century glass windows). Tree of Jesse, story of Adam and Eve, Passion of Christ, life of the Saints ...

The burial, or sepulcher of Saint-Rémy, classified in 1849, is composed of eight human-sized characters and represents the anointing of the dead Christ, in the presence of his afflicted relatives. Saved from the revolution at the end of the 19th century and restored for 3 years by the Sciapode workshop, this entombment is characteristic of the so-called Renaissance Mannerist style (influenced by Italian art). Style that prevailed in the Troyes after 1540.
The lying Christ is surrounded by Nicomedes, a Holy Woman, the Virgin supported by Saint John, two other Holy Women each holding a perfume vase and Joseph of Arimathea wearing the crown of thorns and the shroud.
Only about forty monuments of this type remain in France. Champagne being, with Lorraine, a privileged territory. The Sepulcher of Ceffonds is located in the north chapel of the church.

The church has kept its Romanesque bell tower.
Cross classified in the cemetery.