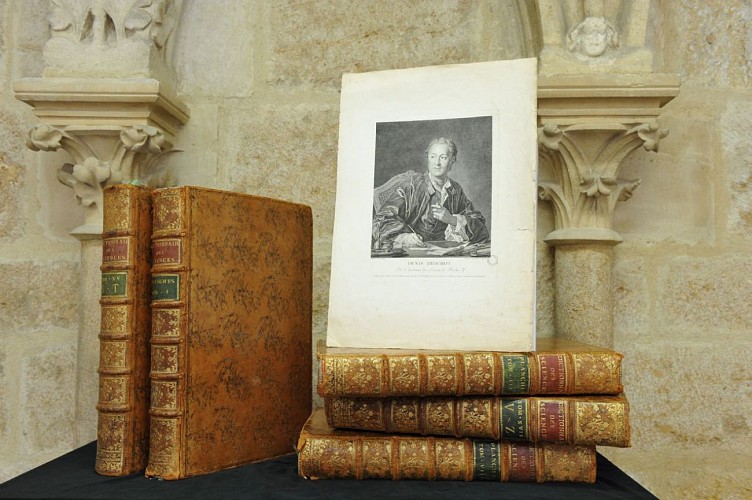 Denis DIDEROT
Encyclopédie philosopher (1713-1784) – born in Langres.
Langres, birthplace of philosopher Denis Diderot
Langres’ most illustrious son is quite definitely Denis Diderot, born in 1713 on the square that now bears his name.
He was the son of a renowned master cutler and received his education at the Jesuits’ school. His father would have liked him to take
holy orders, but, unlike his brother, Denis was not to embark on that path. At the age of 15, he declined to follow his father into the
business and to take up his uncle’s canonical post, and set off to continue his studies in Paris, at the Lycée Louis-le-Grand.
His father cut him off without a penny when he refused to enter one of the learned professions. He worked as a public scribe and
performed various jobs for 15 years or so, translating from English into French to earn a living.
He was asked in 1746 to translate a British encyclopaedia published in 1728. This gave him the idea of re-writing what was to
become the Encyclopédie! Thus began a magnificent but by no means remunerative work that was to be completed in 1766.
Diderot and his town
“As far as I am concerned, I belong to my country,” he used to say. The Langres area is proud to have been the birthplace of this man
who, along with Voltaire and Rousseau, featured among the emblematic figures of the Age of Enlightenment. Diderot was to return to
his native town on only five occasions. It was too small for him; his ambition and destiny lay elsewhere. As an eclectic, prolix writer,
he was to venture into every genre: philosophy, the novel, theatre and art criticism. A scourge of intolerance, a rejecter of traditional
moral authority and a reviler of torture, he – and others – were to fight for the triumph of reason and universal human welfare.
His astoundingly modern masterpiece remains the Encyclopédie, nothing short of a monument to and triumph of human knowledge,
which he edited tenaciously for over two decades.
A man of passion and innovating intellect, his comments on Langres and its people are sharp and contradictory. Although his eyes
“roamed over the finest landscape in the world” from the Blanchefontaine walk, he said of his fellow townsmen that they “have wit,
education, gaiety, liveliness and slowness of speech, they have books, they read and produce nothing”…

DIDEROT and Haute-Marne in a few dates:
5 October 1713: Born in the house at number 9, Place Chambeau, now Place Diderot.
1723–1728: Education at the Jesuits’ school. Denis was a brilliant pupil.
1728: Diderot left Langres for Paris, where he continued his studies and settled permanently.
1781: He presented the Town of Langres with his bronze bust by Houdon.
31 July 1784: Death of Diderot.