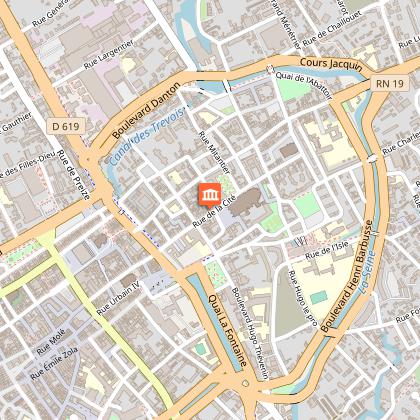 Created around 1157 by the Cathedral Chapter at the same time as the Hôtel-Dieu on foundations which could date back to the 8th century. , the former "Saint-Nicolas hospital" is considered to be the first in the city. He welcomed the poor, widowers and widows, the elderly and orphans. From the end of the 18th century. Children from all other hospitals are also accommodated to learn a trade. Completely destroyed, it was rebuilt from 1839 to 1842 according to plans by Pierre Gauthier, architect of Parisian hospitals in the same sober and rational style (Bicêtre, Garches, Lariboisière). The site became a hospice dedicated to the elderly in 1988, and closed in 1997. All the buildings have been restored and converted into private apartments. At the end of the courtyard, the vast porch of the old chapel is crowned with a triangular pediment on which the attributes of the bishop are carved (miter, crozier and cross) and surmounted by a bell tower carrying a clock. The eastern end of the facade marks the site of the first enclosure and the old Ursins gate (eastern gate).