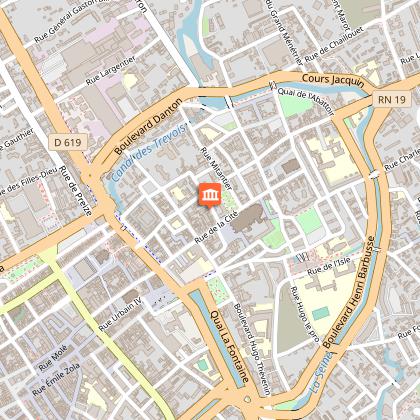 This former hôtel (private mansion) belonged to the Chomedey de Maisonneuve family, one son ofQuartier de la Cité which left for Canada, which was called New France at the time. In 1642, he founded Ville Marie, later called Montreal, and became governor until 1664.

His sister, Jacqueline de Chomedey de Chevilly, lived in the hôtel. She placed it partially at the disposal of Marguerite Bourgeoys and two friends who wished to set up a non-cloistered community in order to honour the visitation of Mary to her cousin Elisabeth. These women
lived outside the convent, « sans voile ni guimpe » (without veil or wimple), a verymodern idea for the time. The experiment that started at the instigation of Abbot Antoine Gendret in 1644 was later discontinued.
Marguerite Bourgeoys was born on 17 April 1620. Thirty-three years later, this provincial woman went on a great adventure. She left her belongings, her family and friends to go to Ville-Marie, in the company of the governor Paul Chomedey de Maisonneuve.
She did not know at the time that her decision would lead to her inclusion in the history of pioneers of Canada. A missionary and emeritus professor, she founded the Montreal Congrégation Notre-Dame, which is still active today. Her work has crossed the centuries just as she once crossed the ocean in her time.
At her death in 1700 in Montreal, she was considered to be the “mother of the colony”. The Catholic Church made her a saint in 1982.