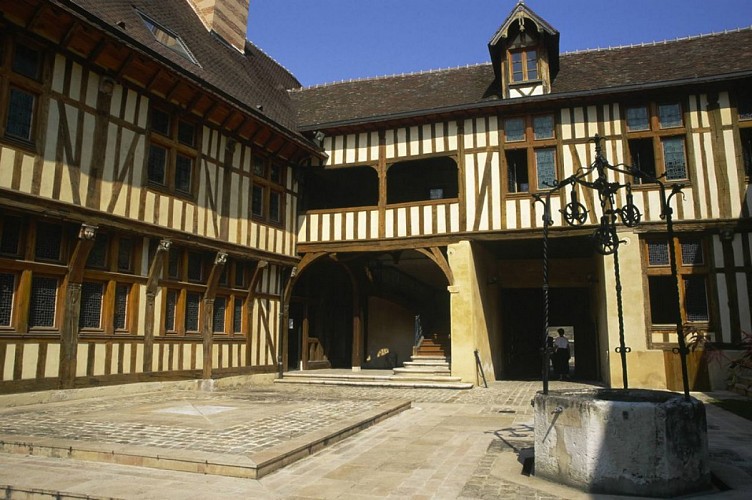 This former canon residence dates from the 13th century. It was then called the Hôtel de la Montée, because the grand entrance was located on the Montée Saint-Pierre. The turret, rebuilt in 1989 during the building's refurbishment, sits on the last vestiges of the rampart, which can be seen on the right.At its base, the little Maison des Trois-Pierres, dating from 1753, was a cobbler's stall for a long time.Another turret rises at the corner of the Montée Saint-Pierre whose plan is traced on the street's paving stones. A third turret, called the Chapitre, located on the corner of the rue de l'Évêché, was demolished in the 19th century.

The carriage entrance is equipped today with a gate that replaced the old oak door. In the interior courtyard to the left, the beautiful half-timbered house built in the 16th century
still has its beams with sculpted ends of figurines and polychrome escutcheons ; the one on the right is most likely from the 18th century.

In the centre, the octagonal well, built based on plans from the 16th century, has a system of triple pulleys with iron posts.

The Hôtel du Petit Louvre has been occupied by illustrious individuals, including Joan of Arc in 1429. In the 16th century it was the residence of Louis Budé, brother of the great
humanist Guillaume Budé ; Bishop Odard Hennequin, chaplain of King François the 1st and, in the 17th century, of Field Marshal Charles de Choiseul-Praslin, governor of Champagne.

In the 18th and 19th centuries, the Bourliet de la Prairie family set up a large post house here. The stagecoaches, which entered by the gate on the rue Linard-Gonthier, would reach Paris in a final stage lasting 24 to 30 hours