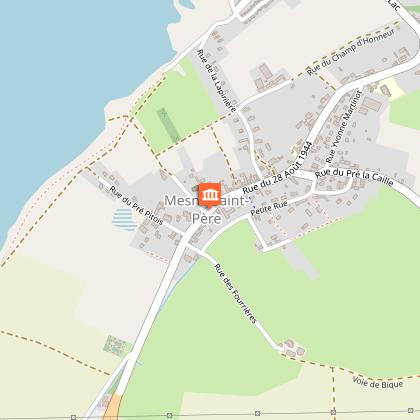 The origin of Mesnil-St-Père comes both from "Mansionile", designating a small house, and from "Saint-Père", a deformation of Saint-Pierre, which is honoured on the patron saint's day.

In the 11th century, Mesnil-St-Père was called " Magnum Magsnillum ", Grand-Mesnil, as opposed to Petit-Mesnil. 296 inhabitants in 1790 331 inhabitants in 1999 374 inhabitants in 2005
What are the names of the inhabitants? The "Mesnilois".
1745 hectares in surface area
Wet agricultural region: Wet Champagne
Geographical region: Southern forests of Champagne
A bit of history: Mesnil-St-Père was famous for its tileries. In 1885, there were still 7 tileries that supplied public buildings and private homes. The first were established in the 12th century by the Counts of Champagne. They produced glazed tiles of different colours, brown-red, green, yellow and black, then in the 17th century, smaller semi-circular tiles for the roofs of turrets, dovecots and mansions. In Troyes, one can still admire tiles made in Mesnil-St-Père on the roofs of the Church of Saint-Nizier, the Church of Pont-Sainte-Marie and the Hôtel Marisy.
Since the construction of the dam-reservoir, the economy of the village has been profoundly modified: the working of clay, symbolized by the last three tiles, sunk under water, has given way to a huge artificial lake. This idea came about following the major floods of the Seine in the winters of 1910 and 1924, with the aim of controlling the river. Thus was born the "Chabal" plan, named after its author, which provided for the construction of seven reservoirs, including the "Seine" and "Aube" reservoirs.

Cultural heritage: Church dedicated to Saint Andrew, made of stone and brick, rebuilt in the 17th century. The porch and the tower are Romanesque, while the choir dates from the 16th century. Beautiful statues of the Virgin and Child from the 14th and 16th centuries, altarpieces of side altars, woodwork in the choir and the statue of Saint Andrew, accompanied by two angels, from the 18th century, decorate the interior of the church. Glazed tiles from the 16th century surround the high altar. Grange dîmière: on the way down from the church to the town hall, one walks along a large red brick building. Better preserved on the opposite side, all half-timbered and covered, this very old barn was the tithe barn of the parish priests of Mesnil, also lords on behalf of the Benedictine abbey of Montiéramey.

Natural heritage: The commune still conceals a traditional landscape of wet Champagne: forests, wet meadows and ponds, ponds, orchards are privileged sites for fauna and flora. Pollard willows and a remarkable oak tree, 6.10 m in circumference, on the edge of the Chemin de l'Orient, punctuate this exceptional landscape.
The White Rabbit Trail, a 3km long playful path, allows you to discover the fauna and flora, the heritage and the secrets of the village. Duration of the walk: 1h30.