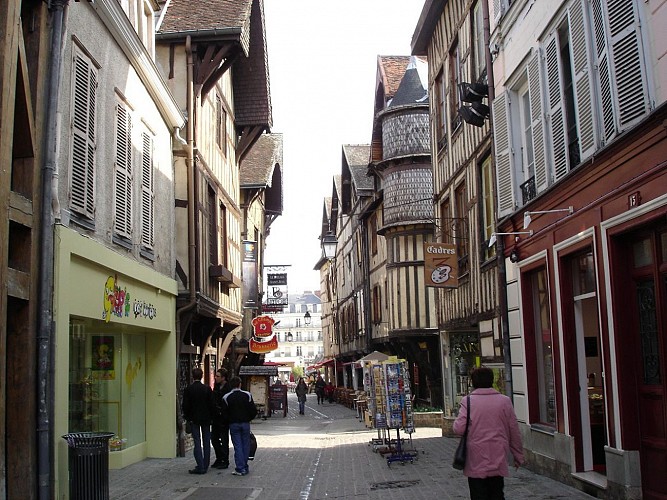 This pretty half-timbered house is in 1964 the first renovated house in the historical center of Troyes. It is a symbol for all lovers of the city: it had to be razed to the ground and only a long struggle led by the defenders of the local historical heritage could save it.
This house is called the "Maison du Boulanger". It has a corbelled and gabled roof with a front truss. On the roof, the dormer window that opens onto rue Paillot-de-Montabert still has the pulley that used to allow bakers to take the bags of flour up to the attic.
Since 1975 it has housed the Troyes Cultural Centre.
This district, particularly the rue du Domino, now rue Paillot-de-Montabert, was the goldsmiths' district in the 16th and 17th centuries.
One of them, François Roize, had the house built at the opposite corner of the square between 1578 and 1618. The space is so coveted there that he had his corbelled staircase placed in a turret with floors and a conical roof covered with diamond-shaped slates, supported by two caryatids and an atlantine.

This Renaissance-style hotel has belonged since the beginning of the 15th century to a great Trojan family of drapers and magistrates, the Jouvenels, ennobled under the name of Juvénal des Ursins. The rue Champeaux was also called "rue de la Draperie".
Jean Jouvenel or Juvénal (circa 1360-1431), magistrate in Troyes and then in Paris, was appointed in 1388, provost of the merchants of Paris.
Among his sixteen children, Jean, archbishop of Rheims, participated in the revision of the trial of Joan of Arc, and Guillaume (1401-1472), was chancellor of the kings of France Charles VII then Louis XI; Jacques was the patron of a famous manuscript richly illustrated with miniatures: the Mare historiarum of Giovanni Colonna (kept at the National Library of France).
The hotel was rebuilt in white stone after the great fire of 1524. The facade with large mullioned windows is decorated with a beautiful oriel in Gothic style with three faces, surmounted by a turret finely carved to date (restored in the 17th century). The interior stained-glass windows depict the donors and The Crucifixion. The roof has a large 15th-century Gothic dormer window from an earlier building.