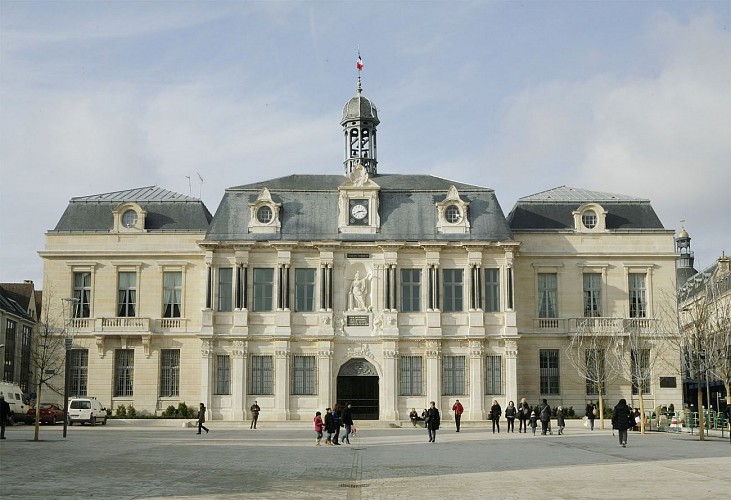 In 1482, King Louis XII agreed to entrust the management of the city of Troyes to a mayor, assisted by aldermen. These offices, most often voluntary, were filled by judges or merchants. The first mayor of Troyes was Edmond Le Boucherat.
Before him, an advisory Council sat in various places around the centre of the city, such as the Chapitre Saint-Pierre or the former Cordeliers convent. In 1479, the Council left this aristocratic neighbourhood and set up shop in the « corps du bouchon », renting near the Saint-Urbain church a house called the Chambre de l'Échevinage (aldermen's chamber), fitted out with a bell for calling meetings.
In 1494, the Council decided to have a new City Hall built. Louis XIII authorized for that purpose the use of a small portion of revenue from taxes on wine and salt. The building was built little by little and was not finished until 1672. Two wings were added at the back in 1933 and 1937 by the architect F. Balley.
The central façade has blue marble columns and a niche with a helmeted Minerva, which replaced a statue of Louis XIV that was destroyed during the French Revolution. The monumental chimney in the Municipal Council Hall is decorated with a large wooden medallion bearing the effigy of the King, sculptured in 1687 by the Troyen François Girardon (1628-1715).
Another memorable reminder of the French Revolution on the façade is the revolutionary motto that was found at the time on all the town halls in France : « Unité, Indivisibilité de la République, Liberté, Égalité, fraternité ou la Mort » (unity, indivisibility of the Republic, liberty, equality, fraternity or death).