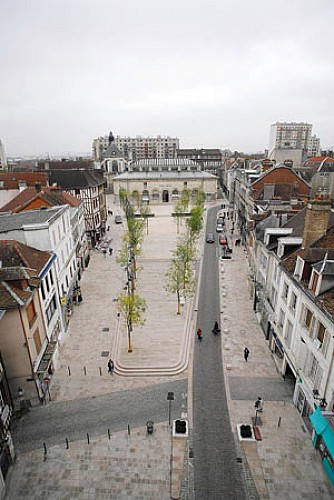 The former rue Notre-Dame, today called rue Emile Zola, widens to the west into a vast triangularPlace Jean Jaurèsplaza called the Marché-au-blé (wheat market). Trade in cereals, a staple of medieval society, was busy and lucrative and explains the many inns and hotels around the square over the centuries, for example the Hôtel du Mulet and the Hôtel des Trois Rois.
But the square was also used for public executions. In the 16th century there were two pillories there, where criminals were exposed to the public, and a gallows, where the condemned were hanged. The French Revolution considered that executions would be less cruel by guillotine, one of which was set up on this square.
Among the famous condemned criminals, history has retained the name of Claude Gueux, imprisoned at Clairvaux and guillotined in 1832. His story and execution caused indignation in Victor Hugo, who published a famous pamphlet on him and against the death penalty. During a voyage in 1839, he made a stop here. “I have long thought about this poor, intelligent and noble worker, dead seven years ago in this place, owing to the fault of society that was unable to raise the child and correct the man.”
The large building that lines the square was the Bourse du travail (labour exchange) from 1905 to 2006. It was built in 1837 and used as the hosiery hall. Manufacturers from the entire region came to sell their products, after which the building housed the trade unions of Troyes.
The house at n° 28 was the birthplace of Edouard Herriot (1872-1957), who was mayor of Lyon, senator, president of the council and president of the National Assembly.
In 1919, the square was re-named after Jean Jaurès, an eminent French politician, deputy of Carmaux (Tarn), socialist and pacifist, who was assassinated in Paris on the eve of World War I.
Renovated in 2005 and opened up to pedestrian traffic, the square is now covered in Etrochey paving stones.