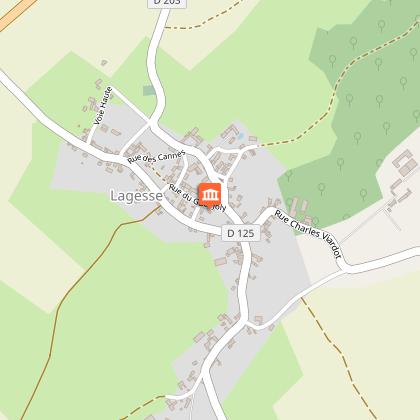 This church is very simple. A large rectangular room with two beautiful stone statues of the 16th century on the wall; a Madonna with Child and a Bishop who must be St Martin; a large wooden Christ and a statuette of St Eloi. This church was restored in 1843 by the then mayor Mr Sébastien POINSOT. There was discovered an underground 2m wide and where a man could walk standing, but where is he going? Building: - Stoup, limestone, ribbed decor. - Choir fence, wrought iron frame, 1870 (?). - 2 "bourgeois benches", early 19th century; that of the south aisle is adorned with carved foliage. - Exhibition, early 19th, drapery tabernacle, gilded wood. - 2 bells, dated 1847. The smaller one was later remelted. Sacristy: - Monstrance, silver foot, copper cross, golden silver spokes, but no punches. - 2 lamps "True Pigeon". - Dish in oval quest, 19th century, punches In storeroom: - Rod of procession, without its statuette, with neo-classical column, gilded wood, early 19th century. Visits possible by appointment on 03 25 40 15 17 (Monday from 8h to 12h and Thursday from 8h to 12h and from 14h to 17h)