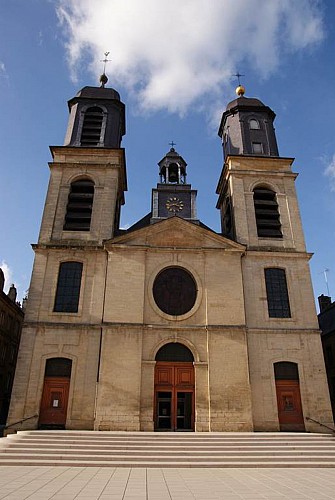 Classified as a historic monument
Upon the Revocation of the Edict of Nantes in 1685, a decree of the State Council gave the Protestant church at the Place d'Armes to the Catholics. who transformed the church under the leadership of Robert de Cotte, the brother-in-law of Mansart. In honour of Charles Maurice Le Tellier, Archbishop of Reims, the church was given the name Charles Borromée, who participated in the drafting of the Council of Trent, a founding element of the Counter-Reformation. Its austere architecture is a mix of Protestant character and monumental expression of classic churches. Its furniture, altars in the chapels and woodwork of the choir is remarkable. Louis XIV financed the altarpiece with ionic columns. The great red marble framework once exhibited a canvas depicting Saint Charles Borromeo rescuing the plague victims of Milan, painted by a monk of the abbey of Orval.