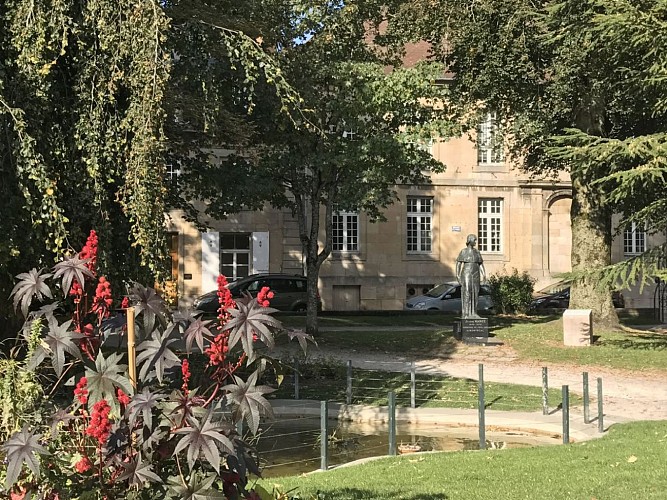 Jeanne Mance, born on 12 November 1606, was an extraordinary 17th century figure. Second of a family of 12 children, she devoted
herself to filling the void left by the early death of their mother.

During her years in Langres, she worked unstintingly to help her countrymen survive the (30 Years’) war, the plague (5,500 died in
and around Langres) and poverty. After encountering the town’s Jesuits and hearing about the first French missionaries in America,
she set out from her native town in 1640 in answer to a call to the mission field.

After a few months in Paris, she took ship from La Rochelle with 50 or so fellow passengers. The expedition eventually landed on an
island in the St. Lawrence River on 17 May 1642: Ville-Marie – the first name of the city that was to become Montreal – was founded.

As nurse, administrator and Governor Paul Chomedey de Maisonneuve’s right-hand woman, she deployed her talents in the service
the French and American Indians alike.

By founding the Hôtel-Dieu and making three journeys to France, she made a decisive contribution to the success of that “crazy
venture.”

Being a “free spirit,” she always rejected the idea of joining a religious order. Nursed by her friend, Marguerite Bourgeoys, Jeanne
Mance died on 18 June 1673, after handing her hospital over the Sisters of Mercy of Saint Joseph.

As the colony’s sole “man” during the governor’s many absences, she remains an example for contemporary North American feminist
circles.