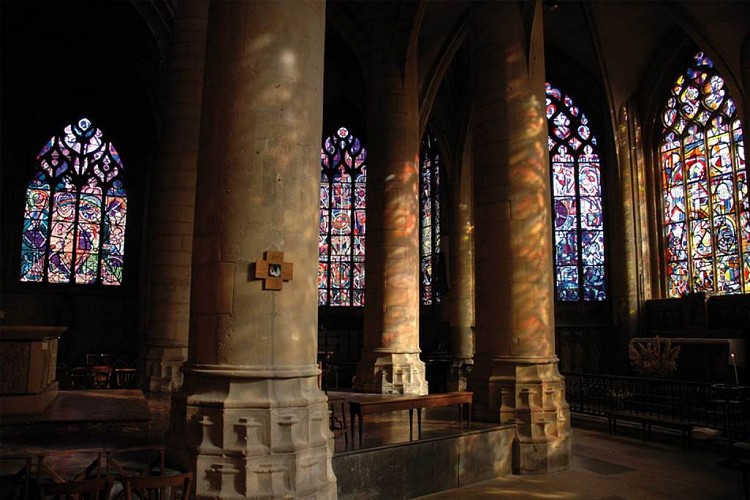 Building and style : Begun in 1499, the construction lasted 120 years, using for the second time the foundations and some of the elements of the primitive roman church. Late gothic style showing a great unity, with 5 naves, but no outside abatments. The narrowness of the central nave, the pillars without capitals emphasizes the impression of height (18 m ) Exceptional ribbed vault. The keystones and intersecting ribs are well decorated with pendantives. The top of the gothic windows shows a large variety of carved decorations. The stair of the organ – loft and the outside part of the west portal are built in a renaissance style. The south portal is neo-gothic (restored in 2009) and the spire were added in the XIXth century. The inside of the building, sober and striped, was restored after the bombardments in 1944.

The history : The Black Virgin in Mézières has been honored since the Xth century. The annual pilgrimage ended in 1962. The wooddes statue burnt to ashes in 1643 was replaced by the present stone one, in the XIXth century. 1521 : siege of Mézières by the army of Charles Quint, the Germanic Emperor 1570 : The King of France Charles IXth married Elizabeth of Austria in the church of Mézières. Wars of religion, the French revolution, wars in 1815, 1870, 1918, 1944 : the church was often taken as a target and devastated. In 1946, under the order of Pope Pie XIIth, it became a basilica.

The windows : Made between 1955 and 1979, the basilica's windows are the work of René DÜRRBACH (1911- 1999). He was a painter, a sculptor, a collaborator and a close friend of Picasso. The windows were made by a master glassmaker André Seurre in Besançon ; they were installed by Jean Lanfranchi, a maker of glass in Mézières. More than 68 windows are as evidence gives to non figurative art, in the second half of the XXth century. The artist uses a cycle of symbolic colours, figures, universal signs (such as cross – heart – circle – square) in order to create a way of meditation to Mary, around the duality between "the Black Virgin" and "the Virgin of Hope"

The organ : Built in 1997 by the Koenig factory of Sarre-Union, it's a mechanical organ with 40 stops. Made in the classical style of organs in north Europe

Organ concerts in July and August (orguebasilique.free.fr), guided tours throughout the year, whether around the stained glass windows, organ-visit, a panoramic tour or a walking tour of the city. Middle Ages in the Renaissance ... In season: walks of the ramparts / torchlight visits.