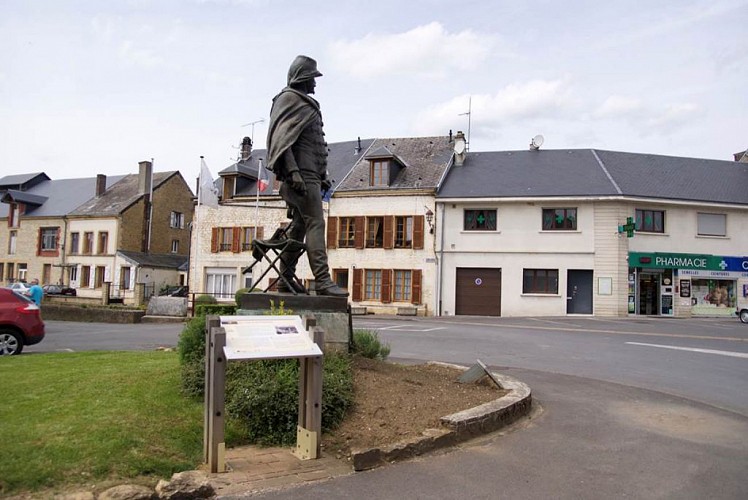 The family of General Margueritte, who bears the name of a village near Nîmes, comes from the Gard department, but, owing to the hasards of life, he was born in the Meuse department in 1823.
A brilliant cavalry officer, he took part in the Mexican Campaign (1867) before taking the Command of the First Regiment of “Chasseurs d’Afrique ( light cavalry) in Algeria .”
Called back to France as brigadier, he is appointed major general on 29 August. 1870 to lead the Second Reserve Division of cavalry, which is hastily formed by four elite regiments and two artillery units. He is fatally wounded at the beginning of the
afternoon, on 1 September, when the cavalry is about to launch an attack on the enemy infantry. Transported to Belgium, he dies in Beauraing on 6 September.
This beautiful statue, an expression of tragic ardour, is given back to France by Algeria in 1968, and is transported from Kouba to Floing to be placed in the heart of the village: it is the statue of an exemplary leader who, with his cavalry, sacrifices himself to save honour, when he knows perfectly well that the situation is hopeless.
Some of his most remarkable words are: ‘my true calling is not to be a soldier, I don’t like war, I hate it...’