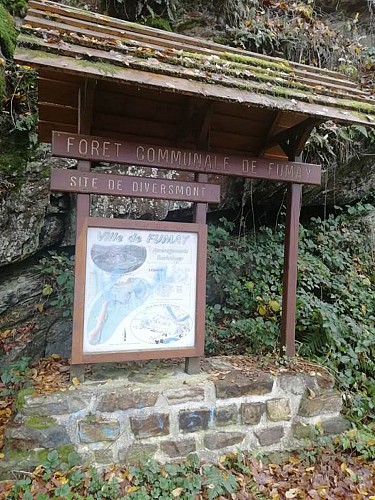 In 1610, monks obeying the precepts of St. Jerome built a convent nearby.
Both buildings were sold as national property during the French Revolution and acquired by an innkeeper of Fumay, Joseph Ridoz, who, around 1795, destroyed the buildings in order to sell the stones.

The chapel was rebuilt in 1820.
In 1827, the archbishop of Reims authorized the celebration of the mass in the chapel.
In August 1914, the building was partially destroyed by a German shell. After the war, in 1919, Father Péchenard then decided a subscription for its repair. The repair of the chapel was realized between 1919 and 1923 according to the plans of Mr. Bigot, a local architect.

By following a long avenue of lime trees, planted in 1738, we arrive at the Notre-Dame de Divers-Monts.

Tradition :
Each year, the statue of the Virgin is carried out at the St-Georges church during the procession of Monday of Pentecost, where she remained until the Assumption (August 15th)
Originally, the Virgin was carried by the slate workers. The procession is associated with a legend...

Legend :
... one day, when we had forgotten her in the church of Fumay, the Virgin was taken with a great sadness. At night, overwhelmed by nostalgia for the convent, she descended from her pedestal determined to retunr to the chapel. She made the journey on foot, under the rain, wet and soiled by the mud. Then, she decidedd to wash herself in the stream nearby. Since that time, the water of the stream is considered miraculous and have the property of curing many diseases.