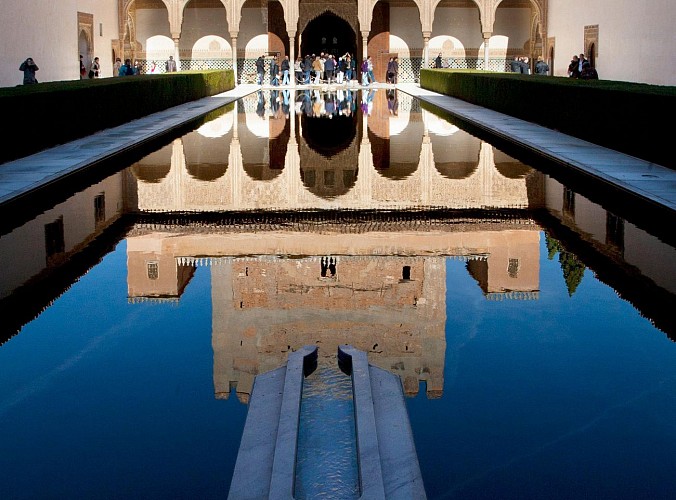 SET OFF TO DISCOVER THE ALHAMBRA PALACE, WHICH IS CLASSED AS A UNESCO WORLD HERITAGE SITE, ACCOMPANIED BY YOUR GUIDE! THEN ENJOY A NON-GUIDED TOUR OF THE FAMOUS GRANADA SCIENCE PARK!

MAKE THE MOST OF YOUR GUIDED TOUR OF THE ALHAMBRA AND LEARN ABOUT ITS ARCHITECTURAL AND HISTORICAL HERITAGE! THEN SET OFF TO EXPLORE THE GRANADA SCIENCE PARK!
Your guide will pick you up from your hotel in central Granada.
Make the most of this guided tour and immerse yourself in the history of this famous fortress. Your expert guide will be with you throughout your tour to answer your questions and tell you about the history of the palace.
Your guided walking tour will include:
* The citadel: the Alhambra’s oldest building
* The Nasrid Palaces: a complex which consists of the emblematic “Mexuar” and “Comares” palaces and the Court of the Lions
* The Generalife Gardens: an example of Islamic architecture

After your tour of the Alhambra, your guide will take you back to your hotel or central Granada.
Then explore the Science Park, one of Europe’s largest interactive museums, at your own pace. You can see various permanent exhibitions there, such as: “Travelling through the Human Body", “The Culture of Prevention", “The Biosphere”, and "Al-Andalus and Science”. Afterwards, stop by the planetarium and learn about the mysteries of the universe!

Admission to the different public areas of the Alhambra (the Nasrid Palaces, the citadel, the Generalife Gardens)
Admission to the Science Park
Transport from/to your hotel in central Granada
The services of an official tour guide

* Availability: Tuesday to Sunday (excluding exceptional dates)
* Duration: 3 hrs approx. (the tour lasts for 3 hours, you will visit the Science Park on your own)
* Times: Alhambra: 9:15am (pick-up from your hotel in central Granada between 9:15am and 9:45am)/Science Park: 3pm to 7pm
* Departure point: your hotel or close to the Alhambra
* Languages: Spanish, English

* To take part in this activity, simply present your voucher to the service provider on the day
* The ticket to the Science Park allows you to enter between 3pm and 7pm
* Comfortable clothing and footwear recommended
* Depending on the nationality of participants, the tour may be conducted in more than one language
* Transport from your hotel is possible for people with accommodation in central Granada only
* ALL VISITORS (ADULTS AND CHILDREN) MUST BRING THEIR PASSPORTS THE DAY OF THE VISIT