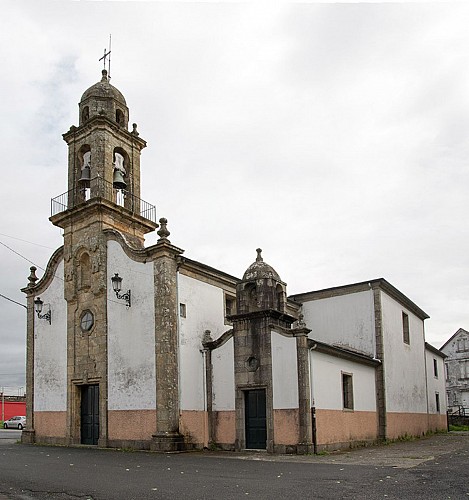 THE LEGEND OF CRISTO DA CADEA (CHRIST OF THE CHAIN)

At the parish church of St. Mary’s of Neda you will find the image of a Christ known as Cristo da Cadea (Christ of the Chain) as it has a chain around the body which secures the cross.

This image reached Ferrol on a boat from England in 1550 and was bought by the parish priest of Neda who placed it in the temple. The boat also brought other images which were taken to the cathedral of Mondoñedo or to Viveiro.

Legend has it that the image of Christ arrived by sea and the locals placed it on the altar, but it returned to the sea again and again so they decided to tie it with a chain, hence its popular name. The fact that the religious images came by sea is a recurring theme at various places on the Galician coast, some chronologically from the same period as Cristo da Cadea; another recurring theme is the fact that the images wanted to go back to where they had come from, but not that they would be chained so they would stay.

The image of the crucified Christ is made of carved wood and is placed in a magnificent Baroque retable. The anatomy of Christ and the cloth covering him bring to mind certain comparisons with English ivories and miniatures. However, it cannot be said for sure is that its origin is English. What is true is that its style does not fit in with the standard style of the place and the Spanish of the time, denoting influences that lend its look an international touch.