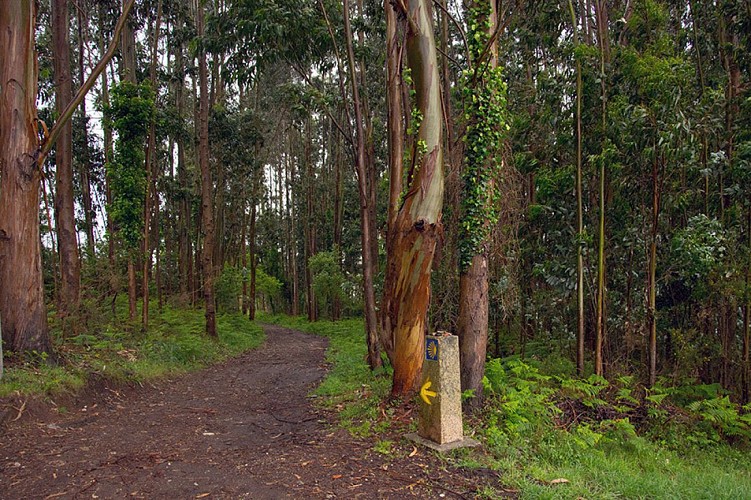 THE EUCALYPTUS IN GALICIA

The path enters here into a small wood of eucalyptuses. During the course of the route of the English Way we will come across the constant presence of this species.

The eucalyptus is a tree originating from Australia and Tasmania. There is a widespread idea that it arrived in Galicia as a present that the missionary Rosendo Salvado sent from Australia and in the mid-19th century, to his family from Tui. But this has not been confirmed. It is on record though that in around 1870 it had already been planted in some places in Galicia.

Its appearance is unmistakeable. It is a tree whose trunk is straight and smooth which can reach great heights, its leaves are elongated and lanceolate. It grows quickly, requires places where there is no shortage of water and it is sensitive to low temperatures. Its wood is poor quality and it is currently used to obtain paper pulp.

In Galicia it has particularly spread across the coastal area at a height of under 500m. The most common variety is the Eucalyptus globulus Labill. At present it is calculated that the surface area of eucalyptuses accounts for more than 12% of the whole Galician forest surface area.

The planting of this species has its critics and its apologists. For the former, the argument is that it takes too much water out of the ground and is a species that burns easily; the latter argue that it grows quickly and makes an economic contribution. It is used as a medicinal plant, inter alia, as an anticatarral and decongestant