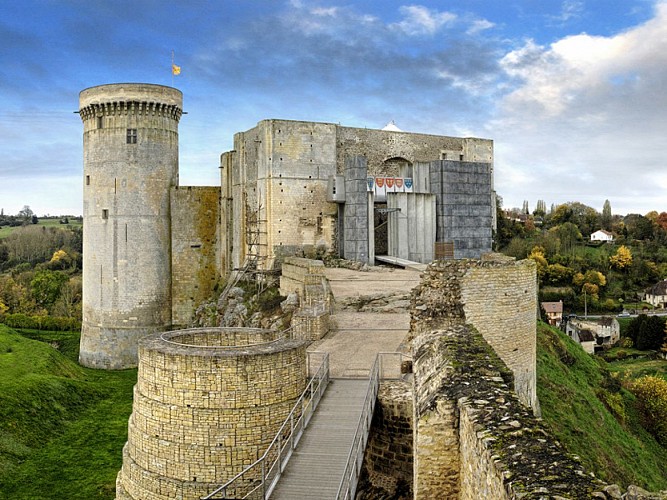 Come and experience history at first hand. Discover the castle in virtual reality with the aid of a touchscreen tablet.
Falaise Castle is a solid stone fortress dating from around 1000. Built by the first Dukes of Normandy, it was enlarged after the conquest of England in 1066. In the12th century, William’s descendants built two square, typically anglo-norman, keeps using the foundations of the original castle.
These buildings show the Dukes of Normandy at the height of their powers. They are most sophisticated of the Royal Dukes’ palace/keeps and best preserved of their fortresses in France.
The virtual reconstruction breathes life into the palace, taking you back to the 11th, 12th and 13th centuries.
You go back to two different eras with the two circuits:
The outside circuit shows you the first fortified enclosure and the daily life in the basse-cour (lower town) in the 12th century.
You go inside for the real immersion in the history of the castle.
Through your touchscreen tablet, the rooms of the keep appear before you as they would have been in the 13th century. You are plunged straight into the splendour of the Anglo-Norman court - how the people lived in the castle, how their lives were organised, what they all did as part of the daily life of a fortified castle. Images of the people who once lived here appear to tell you their stories with the sounds that accompanied their lives.