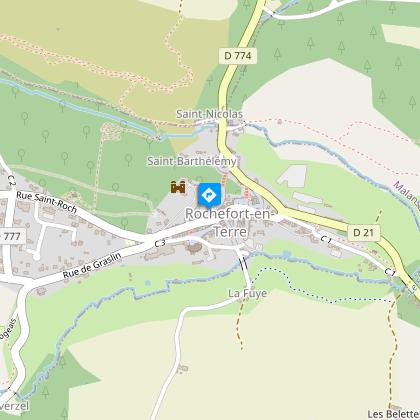 During the 12th century, the castle and city were built on this rocky spur, called “Roche Fort” (large rock). From then on, the place and family were both named “Rochefort”.
In the 14th century, the Rochefort family no longer had any heirs and, therefore, married into the Rieux family. The site and feudal castle thus belonged to the Rieux Rocheforts. It was under this family’s reign, especially under Jean IV de Rieux Rochefort, that the city began to thrive. Jean IV, like several other Breton lords, was opposed to the annexation of Brittany by the Kingdom of France. Nonetheless, Charles VIII commanded to destroy all Breton castles, including Rochefort, after winning the battle of St-Aubin-du-Cormier. However, Jean IV was the guardian of Anne of Brittany, who married Charles VIII and became the Queen of France. Therefore, Charles VIII granted Rochefort 100,000 gold coins, which allowed him to rebuild his castle, surround it with strong fortifications and bring canons into the church. The castle was then destroyed during the French Revolution. It was not until the 20th century that the American painter, Alfred Klots, bought the ruins and turned the castle’s old outbuildings into luxurious apartments