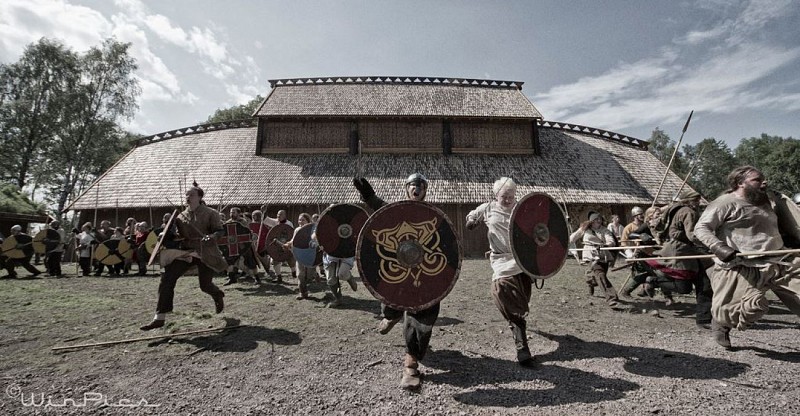 Welcome to Midgard – the World of the Vikings!

Midgard Historical Centre in Borre is a branch of the Vestfold Museums and lies next to Northern Europe’s largest assembly of monumental grave mounds from the Germanic Iron Age and the Viking Age. The Centre opened in 2000 with the primary task of creating and spreading knowledge about Viking Age in the Vestfold County.

The grave mounds in Borre constitutes one of Norway’s most important national heritage sites, and it was a place of power and influence in Europe during the Viking Age.

The Vikings were not only warriors, but skillful sailors and tradesmen. Their ships were built to withstand long journeys, and traces of Nordic settlements have been found as far away as Newfoundland in North- America. Many of the artifacts from Borre are of an eastern character and bears witness of a strong cultural influence from the countries around the Baltic Sea, Poland and Russia. Findings from graves in Kaupang in the southern part of Vestfold show us that the Vikings were in close contact with today’s Central Europe, England, France, Ireland and the areas around the Mediterranean. Several coins found in Vestfold originate from Kufa in Iraq. The Vikings were very fashion orientated, they didn’t just bring anything back home, but they shopped luxury items abroad and equipped themselves with the latest within weaponry.

We are a part of the Vestfold Museums