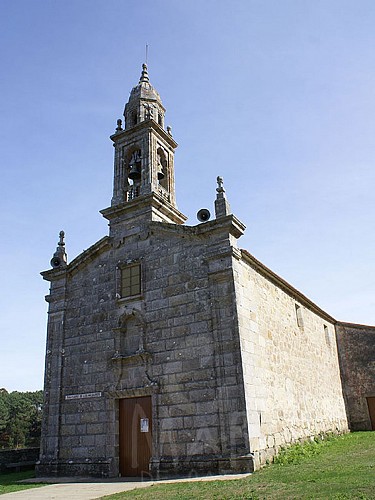 At the Campo da Costa viewpoint besides enjoying one of the best views of Caión, you can also see, in the east, the shrine of the Virxe dos Milagres located at the site of O Outeiro, 10 minutes on foot and just a couple of minutes drive from here.

In the 19th century chapel of the Compostela Baroque style, every 8th September holds one of the most traditional Romerias of the Costa da Morte, os Milagres of Caión declared of Tourist Interest in Galicia.

The festivities begin the Sunday before, when the statue of the Virgin, which is kept throughout the year in the church of Nosa Señora do Socorro, is carried in pilgrimage to its chapel. The following Sunday, the celebrations culminate with its return in procession to the parish church.

The Virxe dos Milagres (Lady of Miracles) has a close relationship with the towns' sailors, as the first thing they see when they return from sea, is the temple of the virgin who receives them from above.

Learn more in the audio guide