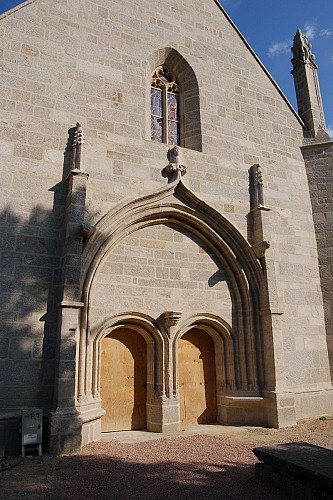 This chapel was built in the mid 15th century, during the reign of the Duke of Brittany François I, where Saint Vincent Ferrier was believed to have preached on 3 March 1418 while staying in Questembert. It was founded by the lords of Rochefort, who had great power and influence in Questembert and surrounding areas at the time. To the left of the chapel, you will find a 15th century stone cross and rectangular sculpture, representing a processional banner. This type of Christian monument is called a “croix bannière” in French and typical to the region of Brittany.
In front of the entrance, a large several century-old yew tree seems to protect the tombs of the parish rectors, including Father Mulot, co-founder of the Montfort Fathers congregation, who died during a mission in Questembert in 1749. The chapel was classified as a Historical Monument in 1922. Restored between 2006 and 2007, it is regularly open to the public (concerts, themed days, etc.).
Things to discover nearby:
At the end of Rue du Chanoine Niol, the old rectory, washhouse and fountain.
The old 15th century rectory is a typical country-style and aristocratic residence of old France (private property). The rectory washhouse resembles a small version of Les Halles. The fountain, made up of three columns, is very unique.
The fountain and Saint Martin washhouse are located at the end of Rue St-Martin and Rue de la Fontaine.