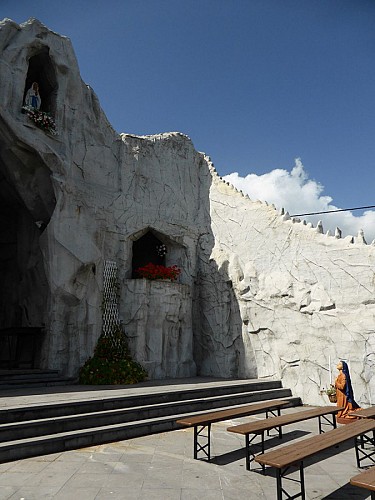 Grotto of Our Lady of Lourdes

In the First World War, the village of Rosières was put to the torch and the Germans murdered numerous civilians. The residents of Vaux-lez-Rosières, the former name for Vaux-sur-Sûre, prayed to the Blessed Virgin Mary for her protection against such a massacre. Their prayers being heard, they decided to build a lasting monument in honour of the Holy Mother. In January 1916, Abbé Jacques decided that this project should take the form of a partial reconstruction of the grotto at Lourdes. Fourteen stations with statues in bronze were laid out around the grotto in order to create a Way of the Cross.

After visiting the grotto, head for Sûre and then Cobreville to discover these pretty villages on your way to Remoiville.