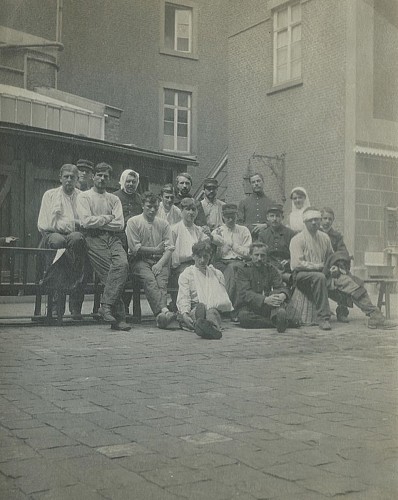 On the eve of battles on the fortified position of Namur, the troops' confidence in the solidity of the forts and in their capacity for protection was great. But since the first bombings, the Belgian soldiers found themselves helpless in the face of the unprecedented destructive power of the German artillery. The forts' resistance was hopeless.

Quickly, communication with the outside became impossible. Left to fend for themselves, poorly equipped and unprepared, the soldiers suffocated in the bowels of the forts, owing to the thick smoke produced by the black powder used as explosive charge.

In several spots, the Belgian soldiers surrendered to panic, owing to the ferocity of the shooting. Others, like those at Marchovelette, died incinerated or crushed beneath the collapsing concrete vaults.

'The smoke and the gases produced by the explosion of shells invaded the corridors, made the air impenetrable and suffocating, whilst the devices that provided electric lighting, ceasing to function, plunged the fort into total darkness at a time when, isolated from the world, the only reverberations were the thundering of missiles exploding at their sides or hammering their carcasses, and the sinister sound of the concrete which, cracking, threatened to crush the defenders. Terrorised men turned mad: one hanged himself, another threw himself into a well! In a fort where, at every moment, the garrison expected the final catastrophe, the chaplain granted absolution to the living and recited prayers to the dead.'