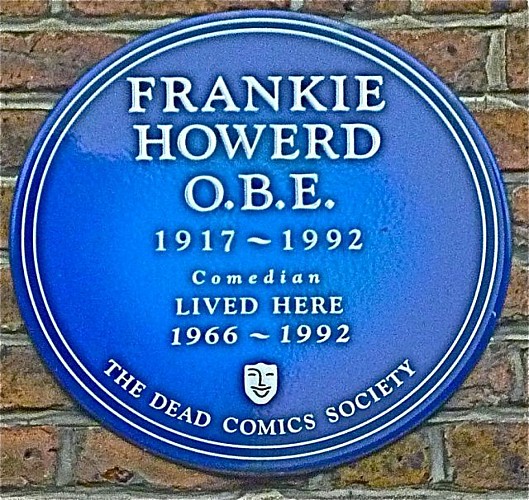 Titter ye not, this is the house in Kensington’s beautiful Edwardes Square where Francis Alick Howard (Frankie Howerd) lived until his death in April 1992.

His career - described by Barry Cryer as “a series of comebacks’ spanned over 60 years although he failed in his ambition to become a serious actor by not getting into RADA.

He became an entertainer in the army during World War 2 (he changed his name to Howerd at this time to be ‘different’). From his radio debut in 1946 through to films and T.V. in the 50’s his profile and success grew, but eventually his style of comedy fell out of fashion.

Peter Cook revived his career by booking him at the satirical Establishment Club in Soho. This led to appearances on That Was The Week That Was and other regular T.V. and stage work.

In his latter years, he became popular with students, appearing in a one-man show at universities across the country. His partner and manager Dennis Haymer stayed with him for over 30 years, but Howerd strived to keep the homosexual nature of their relationship a secret for fear of being blackmailed.