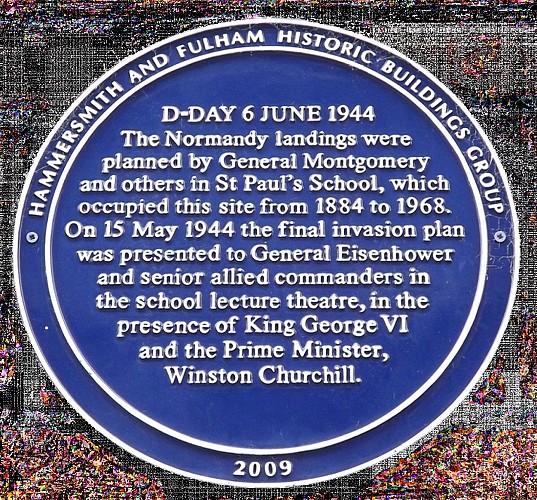 St Paul’s School was situated in Colet Gardens on the Hammersmith Road from 1884 to 1968. At the start of World War II, it was evacuated but its reasonably close proximity to Whitehall and the fact that General Bernard Montgomery was an ‘Old Pauline’ made it an ideal base for the 21st Army Group.

It is said that as an ex pupil, Montgomery took great delight in occupying and working from the Headmasters’ study.

The old lecture hall was on 15 May 1944 the location of the final briefing on the plans to invade Normandy. Among those who attended were King George VI, Winston Churchill and General Dwight D. Eisenhower.

A few weeks earlier on 7 April, Churchill had made a tearful and emotional address to the Anglo-American High Command at St Paul’s with these concluding words

“Remember this is an invasion, not the creation of a fortified beach head”