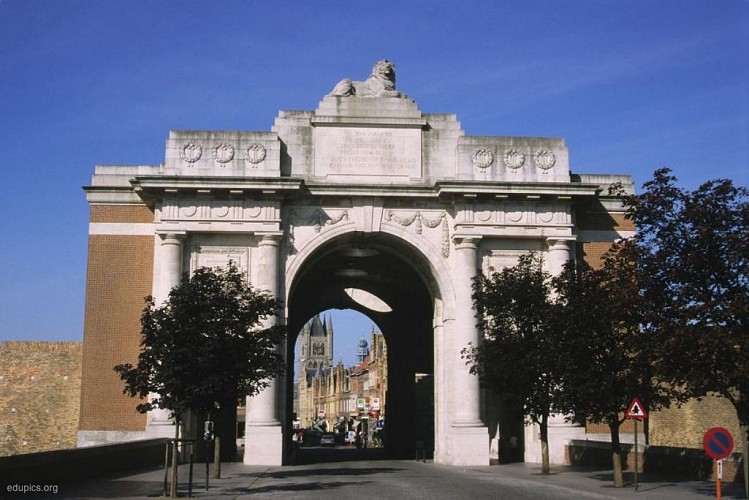 The Menin Gate is one of the symbols of the sacrifice of young men in the First World War. The British Government had wanted to leave the city of Ypres derelict and desolate but it was re-built and the great Gate became the centre of commemoration.

'Designed by Sir Reginald Blomfield, this monument to the allied effort was begun in June 1921 using a grant of £150,000 from the British Cabinet. At the summit of the monument is a British lion designed by Sir William Reid Dick, looking outward" along the Menin Road.

It was unveiled in the presence of the King of the Belgians and several thousand of the relatives whose names - 54,900 of the 'missing' - were inscribed around the memorial, on 24 July 1927. The unveiling of the Menin Gate was broadcast by the BBC.

Of the dead General Plumer said: "They are not missing - they are here."  Siegfried Sassoon however called the Menin Gate "a sepulchre of crime".

Today, at 8pm each evening, the local police stop traffic from passing underneath the gate, and the Last Post is played by buglers from the Ypres fire station, often attended by large crowds.  The Last Post has been played each night in this way since the 1920s save only for the duration of the German occupation during World War II. However the ceremony was performed on the same night the German forces were expelled from Ypres in 1944.