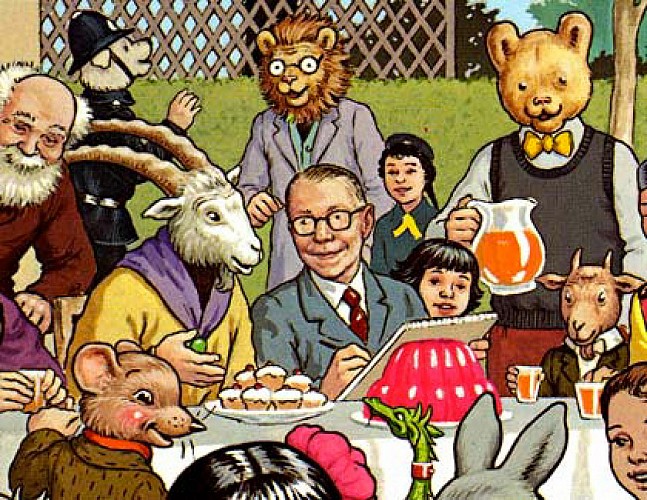 He served in World War I in the British Army in 1915 in Flanders, where he transported troops in red double-decker London buses.

A total of 900 of thede vehicles were used to move troops behind the lines. They were not changed at first amd even kept their red-and-white livery. Soon, however, they were painted khaki, and, the glass windows on the lower deck were prone to breakage, mostly from contact with the men's rifles and packs, they were replaced by planks nailed to the sides of the vehicle.

The B-Type could carry 24 fully equipped infantrymen and their kit. Some were converted into mobile pigeon lofts to house the pigeons used for communication along the front. They served until the end of the war when they were used to bring troops home.

In 1935, Bestall was selected to take over the Daily Express’s Rupert Bear stories from Mary Tourtel.  Much of the landscape in Rupert is inspired by the Snowdonia landscape of North Wales, notably around Beddgelert.

In 1985, he was appointed a Member of the Order of the British Empire (MBE).

In May 2006, Alfred Bestall was commemorated with an English Heritage Blue plaque at 58 Cranes Park, Surbiton, London, where he lived for 30 years.