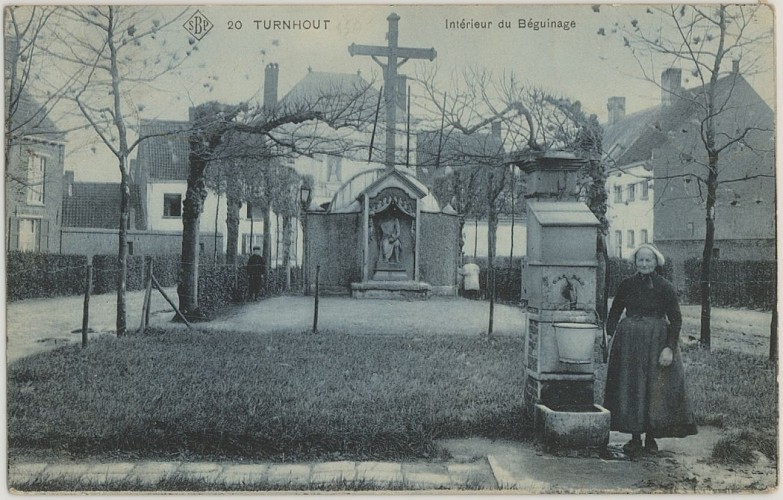 Walk into the beguinage through the Early Classicist gatehouse from 1700 with a statue of Saint Bega. She is the patroness of the beguines, which is why she is prominently present in the church and the museum. In the last quarter of the 17th and the first quarter of the 18th century, 350 beguines lived at the beguinage. There numbers decreased gradually after this. The last beguine was the Dutch Joanna de Boer, who had to leave the beguinage due to illness in 1999. She died in 2002 and was buried on the south side of the church.
The Turnhout beguinage is a gem. Not only because of the peace and quiet but also thanks to the numerous historical buildings. The finest specimens date from the 17th century. The Sint-Jansconvent (house number 56), where the unique beguinage museum is now situated, was built in approx. 1680. The Church of the Holy Cross was consecrated in 1666. It is an example of the interplay between Late Gothic and Baroque. Left at the back of the beguinage stands the chapel of the Holy Face from 1885-1887, which contains an impressive statue of Saint Columba. The chapel was financed by Grand Mistress Octavie Van Genechten. There is a Lourdes cave in the middle of the beguinage with many thank you cards for recovery. Architect Taeymans designed the residential houses left of the entrance in an adapted style in 1911. The beguinage was recognised as world heritage by UNESCO in 1998.